„We got shittons of vaccines from China before everybody else.” Now add a big LOL to Stevie Whisper’s statement to the question, what the authorities in his hometown do to help creatives in pandemic times, and you’ll have a clue about his snotty attitude. Born, raised and staying in Belgrade ever since, the DJ and label head of YES started his musical path in the hardcore scene back in the early zero-zero’s.

Although he was diving deeper and deeper into the realms of electronic music on his way, he never lost his gruff and punky attitude. The script’s been written many times in the past, but it still seems to work: What to do when there’s nothing to do? Well, actually even more. Like starting a Soundcloud page with your collective and throw tons of high quality mixes at people, basking in unexpected heaps of attention. Or record more mixes than you’ve ever done before within one year. However shitty the times are: there’s always something to do. You just need the right attitude. And a certain level of drive.

Stevie Whisper seems to have endless resources of that kind of drive. Counting activities like radio host, band member and X to his musical past, today, he’s not only running three collectives at a time, but is also part of the resident roster of Belgrade’s internationally most acclaimed club Drugstore. And as if this wasn’t enough, he’s doing most of the artworks for the club and is „carrying around heavy stage equipment from time to time”. Well, not at the moment unfortunately. But there’s also enough other plans to make, right? 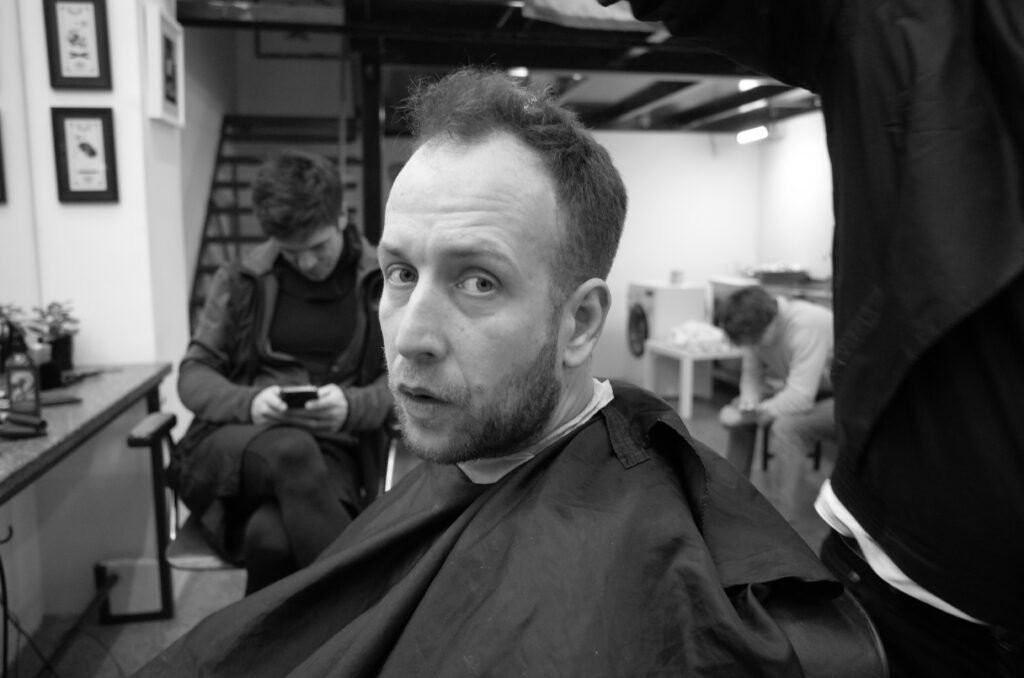 You’ve been part of the early 00’s hardcore scene in Serbia. How was that? And how hardcore is Belgrade today?
I was sixteen when I started going to shows and it was the peak of that era. Mind-blowing experiences every week, loads of kids, loads of bands and insane enthusiasm. But by the time we started to get really involved with the scene through our own bands, labels and promotion, it was already loosing a bit of it’s intensity. Public youth centers were slowly hijacked from us and it became really hard to keep it alive without the basic infrastructure. The whole scene has vanished a bit within a time span of more than a decade now, but the impact it had on the local subculture is still visible. The DIY principle seems to be a natural thing here.

How is the current state of gentrification in the city of Belgrade?
Gentrification here started a bit later than in other parts of Europe, but now it’s rapidly growing – even though we’re still not heavily affected by this process. But I guess it’s just a matter of time until this thing becomes a real problem for the art and music scene. Concerning the situation with finding cheap studio space in Belgrade, it’s still pretty decent, even though almost all of my friends are producing their music at home.

„You can’t pop a pill at a rave on Friday and come to a gig with X’s on your hands on Saturday, can you?”

Are there any obvious connections between Belgrade’s hardcore/punk scene and the city’s techno scene?
As a matter of fact there are quite a few DJs who originally came from the hardcore scene. Also, back then, there were kids going to both raves and concerts. But I can’t really recall if there was ever some sort of serious collaboration between the two.. I mean, you can’t really pop a pill on Friday in the club and come to a gig with X’s on your hands on Saturday, can you?

When did you get into DJing and producing music?
I started quite late. It was 2012. Before, I’ve been playing in bands, hosted a radio show and listened to shitloads of music in general. DJing seemed fun to me so I gave it a go. There was this great fresh energy in the club scene in Belgrade at the time and I was super lucky to be part of it. It’s been less than a year between playing gigs in small bars packed with friends to proper club gigs with bigger audiences. It took me ages to really figure out the way to make music on the computer. Being in a band for years and making music with two or three other people, each one on their own instrument, is a completely different process. So it’s really easy to lose your enthusiasm when you start getting into DAW’s. I was already making crappy loops in Ableton before I started DJing, but it wasn’t up until 2015 that I started producing something that I could call decent.

Tell us about your party series and label YES.
YES is a resident club night in Drugstore that I’ve been running for eight years now and we hosted more than fifty foreign and local acts with more than 100 events (the first five years we had a residency at 20/44 boat-club). It’s an intimate (200 people max.) super-genre-free party with punk attitude, leaning a bit more towards darker sounds, but you can still hear some songs by your favorite teenage icon like Kylie Minogue or Gwen Stefani in the mix from time to time. Within the past few years it was usually me, Vitanov, Andria or Dusan Jankovic supporting various friends we brought from all over the world or we were just playing b2b all-nighters. In 2018, we also started a record label trying to focus on Belgrade-based producers, but also invited some like-minded friends from other cities who were a bit more under the radar.

YES is an interesting choice of name for someone who’s deriving from a punk background (speaking of the preference of punk bands for anti-names like No Means No). How did you come up with it?
Well, as I said above, we started this night on 20/44 in 2013. At that time, this place was a local mecca for House and Disco, so we booked a Thursday night to organize a full-on techno party. There’s that party on the boat that already had a cult status in those days called DiscoNotDisco, so we named ours TechnoYesTechno. It was a joke, but it stayed until 2017 (and I hated it) when we removed both „Techno’s” and just stuck to the word in the middle. Concerning the question about the anti-names: don’t forget that Yes means maybe.

„I’d rather go binge-watch soap operas with my granny than listen to someone playing the same style of music for hours or years.”

A popular record shop describes your first EP as „Nofield music with some spoken-word-shoegaze.” Would you rather avoid putting music into categories?
I’m totally fine with genres. And I think it’s really exciting when there’s a new style spreading around. But what I find way more exciting than focusing on this one genre is coming across artists whose outputs go in so many different directions that it’s even hard to describe or label their sound. I think this also reflects heavily in my non-dogmatic approach to DJing. I’d rather go binge-watch soap operas with my granny than listen to someone playing one style of music for hours or years.

Besides YES, you’re part of the Mystic Stylez collective. How did you get to join them?
Mystic Stylez was founded in 2011 and is focusing on pushing contemporary, cutting edge club sound since the very beginning. I first started doing designs for all of their insane partys with dope bookings. Somehow, at some point, I ended up in the booth with them. And it would be rude not to mention that most of the things I know about mixing songs and making crowds go wild I learned from these guys. It’s eight of them besides me: Phillie P, Thinker, Jackie, Rex Regis, Feloneezy, Hadzic and some young blood that joined recently, who are Little Lu and Dothemath. The crew’s celebrating their ten years anniversary this year, so I hope this pandemic shit is gonna end soon, so we can celebrate it properly.

There’s a third collective you are part of: SuperSizeShe. Does it have a feminist approach, like the name’s suggesting?
I started SuperSizeShe in 2006 with my friend and photographer Nemanja Knezevic, while we were still hardcore kids. But as our tastes in music and art evolved, a lot has changed with the time. After a while, the two girls Andrea Barut and Zorana Josipovic we’re joining us and we organized a lot of shows in different venues in Belgrade. We brought some sick names from the indie scene of the late 00’s and early ten’s to the city like Ariel Pink, Mac De Marco, Dirty Beaches, The Soft Moon, James Ferraro or Molly Nilsson. We also released a few bands, printed art zines, organized exhibitions, had a radio show and so on. The name derives from this BBC documentary about a female bodybuilder that I discovered around 2005. I found it very interesting and it sounded good to me, so we chose it. Can’t really recall if it sounded like a feminist statement to us at the time, but we definitely were sharing the same ideas, politically.

Does SuperSizeShe still exist today?
We stopped working in the collective in 2017 with one last concert, for which we hosted Forest Swords at Drugstore. By the time, I was the only one left doing this and at the same time was already deep into this DJ/producer thing. On top, YES was growing. So it just stopped making sense at some point. But I really miss concerts and I’m planning to start doing this again via Yes in the near future.

Your TISSUE mix is a soft, piano-based piece that comes „straight from the heart” as you put it. How did you approach the selection?
I did eight mixes since the start of the pandemic which is more than I ever did in that time-frame. This “concept” was sitting there for a while and I finally had a good pile of tracks to pick from and record it. So there it is: my humble and very personal ode to piano in pop music, filled with tracks that I really love by artists of different eras and backgrounds. A mixture of obvious chart bangers to indie anthems and some more or less obscure gems. And two tracks by Paul Weller: the worst singer (almost) everybody loves.

Introduction jingle by Harmony Horizon
Digital cover artwork by Love Curly is an excerpt of Mountains of Eden by La Serpent:
https://tissuemagazine.com/series/mountains-of-eden/