41 years, tears tears tears. While salty drops were dripping on the eastern German ground, caused by broken hearts and caged minds, creativity was rising from the ashes of post-war Deutschlands de- and repression. „In der DDR hat man von mir eine Weltanschauung verlangt, ohne dass ich die Welt anschauen durfte.” This quote by GDR singer Manfred Krug can be translated to: „The GDR wanted me to have an idea about the world – without letting me explore it.”

If you either didn’t explore the history of the GDR yourself yet or just wanna feel nostalgic, here’s your chance. Spunky aka Reinhard Spunkner (aka Paddy as he is called by his closest friends) grew up in Dresden, one of the GDR’s epicentres. The father of two sons has gained reputation not only as a DJ and former record shop owner, but also as a photographer. With his contribution to TISSUE Magazine Mixtape, he let a dream he kept for a long time become reality: recording a GDR music only mix. Pure, authentic and real. And why should Schlager be excluded anyways? We interviewed Spunky for some anecdotes of so-called Dunkeldeutschland.

Nadja: Before we dive deeper into the whole GDR topic, tell us a bit about yourself: When did you start DJing?
Spunky: I started in 1995. I always wanted to produce too, but for now I stuck with playing records. And since within the last few years, photography became my second passion, it will probably stay that way. But who knows? Never say never.

How did you participate in the music scene of your hometown Dresden?
Besides being active as a DJ, I was also running a record shop called „Backstock Records”. And I organized partys more or less frequently, be it alone or with friends. I definitely won’t forget bookings like Cassy, Tama Sumo, Mike Grant, Efdemin and Osunlade or nights with music mates like Marc Schneider, Mike Huckaby, Sven Weisemann, Woody and XDB (to name a few). While I was running Backstock, I tried to live off that, but to be honest, without the help of my girlfriend (who now is my wife) and my family I would’ve never ever been able to do this. 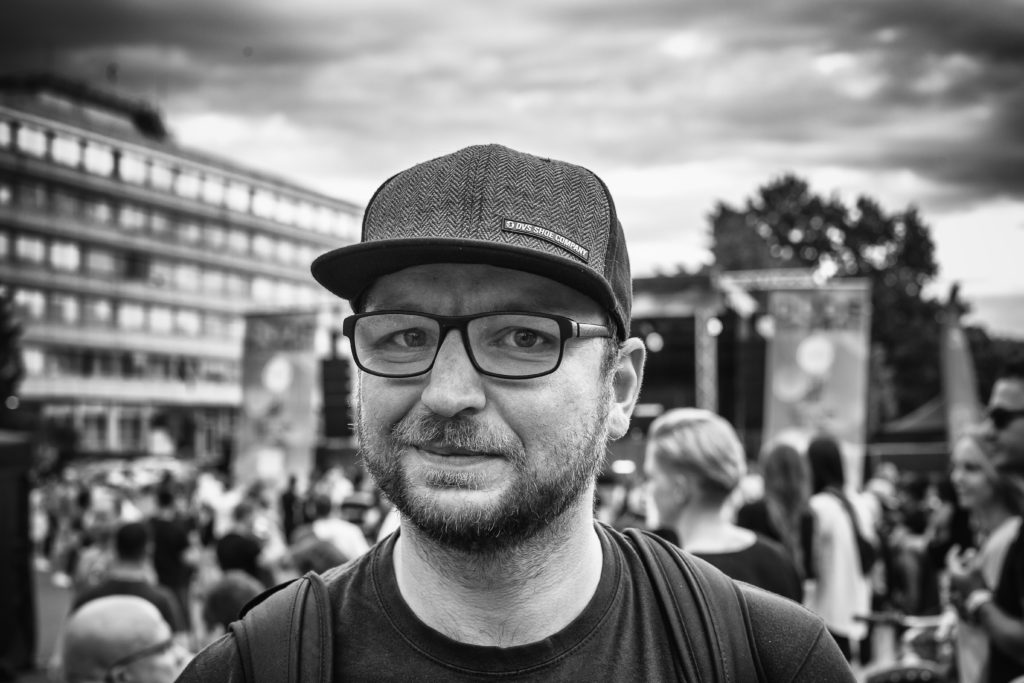 Sounds like you have a „serious” day to day now.
Yes, my daytime job is at a tech equipment retailer in Dresden. Still, I’m playing records in clubs and bars and love to take photos, especially at concerts or demos. Photography really became a big thing for me besides music and I’m really grateful not only for my wonderful wife and my two boys, but also to be able to spend time with such fulfilling hobbies.

“Back in the days everything took way more time. You weren’t standing in the booth after one month like it is today.”

Tell us a bit about your DJ career. How did you start and what happened next?
In 1994 I was 16. Back then, we used to do sleep overs from time to time at one of my buddies and we started going out a lot. One night, the DJ „Tiney” was playing support for Ravers Nature at a club called „Music Circus” (which was called „Zelt” by insiders). I saw him and I was like: „Wow… That’s it! I wanna do that too!” Things got under way pretty fast. I got to know Tiney personally. We hung out a lot, listening to records and soon I started buying them myself. Another friend of mine from these days started buying Hip Hop vinyls. Each of us had one Technics 1210 turntable and we agreed on sharing one of them. So every other week one of us had the full set up.

Back in the days everything took way more time and you weren’t standing in the booth after one month of practicing like today. So step by step, I had the chance to play one or two records at underground raves. It really took many years to become visible as a DJ, you know. Basically, I started in the „Unterwasserbar“, which was part of a club called „Object”. I played at a lot of venues, but I especially would like to emphasize the club „Schleife 9” (and later „Galerie Disko” and afterwards „Altes Wettbüro”). It became kind of a home base for me and my friends. I really took beautiful memories with me from these partys. Playing outside of Dresden I remember Leipzig’s „Distillery”, „Kassablanca” in Jena and several Berlin and Hamburg venues like ://about blank, Globus, Heideglühen, Panorama Bar or Golden Pudel and Golem. Ah, and I’m also having a duo called „Hombres Discos” together with Tiney, who I already mentioned.

So let’s talk about the GDR. You grew up there, right? How did you experience the time, particularly music-wise?
I was 11 when the wall came down. So yes, I remember quite a few GDR years. As kids, we were pretty independent, always strolling around after school, handcrafting pea guns and stink bombs in our backyards, which I guess had an influence on my creative side. Also, I owned my first records as kid, for example „Traumzauberbaum” by Reinhard Lakomy and Monika Erhard or „Lieder aus dem Kinderland” by Gerhard Schöne. I still love to listen to them today. I also remember my dad playing secretly Udo Lindenberg’s „Sonderzug nach Pankow” on our kitchen radio via RIAS, which is short for „Rundfunk im amerikanischen Sektor”. It was a radio station based in West-Berlin. This song became an instant ear worm for me. Concerning the pre-turnaround time my great-grandma played music by „Die Roten Gitarren” from Poland. Another ear worm I still love today: „Twist in my Sobriety” by Tanita Tikaram.

“I don’t want to start talking about all the great, empty buildings people were just walking in and doing stuff there…”

Let’s switch to Techno for a sec: Would you say the longing for freedom was the reason for the great things that happened after the wall came down?
I think during the GDR period, it was really hard for free spirits and (how Hermann Hesse would’ve probably said) „weird” people to . Only a few had the luck to be able to put out their music, even less were successful with it. So when the wall came down, artists from every field experienced a huge creative boost. I don’t want to start talking about all the great, empty buildings people were just walking in and doing stuff there… Yes, I’d say that was a blessing for the scene! This phenomenon is mentioned in a great documentation about the scene of Dresden back in the days. If you want to know more about this, I would recommend you watch the documentation „Rauschen im Tal”. It’s up on YouTube and I was also part of it. Another recommendation: come over to Dresden and party with us. There’s a great spirit in the club scene here, trust me!

How did your early musical education from GDR times influence your todays DJ-, record collector- and promoter-self?
I would say Gerhard Schönes Kinderlieder influenced me as a person, especially the lyrics. And while listening to his music „for grown ups”, I get goosebumps each time. Still today, there are only few artists, who can impress me so much with their message like he does. That’s also why I definitely had to include him in my mix for TISSUE. Our world needs more people like him, deliberate and with a good heart. Listening to music consciously I would say started for me after the turnaround. As a 12-year-old I discovered Depeche Mode and Michael Jackson. Their music had a big impact on my taste, probably even more than everything I was listening to before. Oh yeah… And then there was TRAXX (really important: without a DJ as a prefix!) from Chicago coming to town. He brought the House spirit, which casts a spell over me up until now.

“My first LEGO game before the wall came down? Mind-bending!”

Keyword time! Which GDR moments or cultural phenomenons are stuck in your head and heart?
Der kleine Maulwurf. Lolek & Bolek. East Berlin (even today seeing the TV tower hits me right in the feels). Things that grandma brought with her from West Berlin. Riding a tank with my daddy (when he was called up for military service). My first LEGO game I got before the wall came down. Mind-bending!

And things that weren’t so awesome?
No West TV, only when we were outside of Dresden. Grandma being pissed about the „fucking government” when we had coffee & cake (and me as a child not understanding why). Concerning travels: Baltic Sea, Harz or Thüringer Wald over and over. Maybe a day trip to Deçin or Prague. Also not awesome: the clothes and the haircuts when I look at old photos today. Haha!

How did you come up with your idea for TMM76?
I own more records of AMIGA than of any other label out there. And it’s crazy how much great music was produced in the GDR in general – despite all the political barriers. Most of it is still pretty unknown, so the idea of a concept mix like this with tracklist included was in my head for a long time. And to be honest, I was pretty sure that this exotic idea would go down with TISSUE very well. I’m super happy we made it happen!