Early education is key. Ask Best Boy Electric. It wasn’t only the music taste of her mother that inspired the DJ with an early infusion of punk and the Drexciyan sound (a combo that, by the way, seems to make a lot of sense). Also her uncle, who is a DJ and collector as well, sent his niece Electro gems on a regular basis when she was a youngster.

Still, the Hamburg based artist didn’t get her talent handed on a plate. Besides the inspiration from her family, Best Boy Electric already had her own exact idea for her path in music at the age of three: playing the violin was what little Fine wanted. Later, she started to play the piano and e-bass. Drexciyan basslines anyone?

Now, with 25, her life almost solely revolves around music. Not only as a DJ and promoter for Hamburg’s own Possy and Headshell crews, but also as a friend, a student of historical and systematic musicology – and probably also when hanging out with her mom and uncle.

But enough of all the theoretic stuff. Educate yourself properly by reading the straight-up talk we had with Best Boy Electric.

How did you come up with your name?
I was writing a paper about the soundscape of „Match Point” right before my first gig and when I watched the closing credits, there it was: Best Boy Electric. I thought it sounded nice. Also, there are many male acts calling themselves after women, so I thought „why not do it the other way round?”. Later I learned that it’s the only term that’s not gendered at a film set. And after a year I realized that the name on top suits the fact that I play mostly Electro.

Your family had a big impact on your musical path, right? What exactly did you learn from them?
My aunt used to do home concerts with her quartet, what impressed me a lot. So much, that I wanted a violin for my third birthday. My aunt basically showed me my love for classical music. When my twin sister started to play cello, we could practice together, what was important to keep up the fun I guess. My mom, on the other hand, was listening to lots of electronic stuff, but was also into punk, which definitely influenced me a lot, too. And my uncle, who also is a DJ, tried to show me how to scratch when I was five and told me everything about hip hop, italo, Ed Banger Records and stuff like that.

You’re part of Hamburg’s posse „Possy”, who supports female, trans* and non-binary artists for a better balance in the electronic music industry. Tell us a bit about the crew and how you got to meet the other members.
I got asked to play at the second Possy Party, after meeting Isabelle in a bar. It was my second time djing in a club and there was an open meeting before. I didn’t know about it, but showed up earlier as I was so nervous and wanted to meet the organizers before playing. When I entered the club, there were about 15 people (some of them friends) having a meeting, discussing how to start a collective. So eventually, I became part of the group more or less by accident. Still, I felt the need to start a party series like this for a long time already, but never had a clue how to do it on my own. So I was really glad to get the chance to become part of Possy. I immediately put all my energy into this project. Today, I’m curating the two podcast series and take care of social media. On top, (mostly) Isabelle and me are doing the booking for our parties. And luckily, there are also many other people in the collective who are doing things like creative concepts for our nights, awareness strategies, exhibitions, a magazine and much more. This artistic side happening on top of all the music stuff is what makes Possy special, I’d say.

»Actually my whole life is about music. I guess my only real hobby besides it is knitting.«

Did your common urge to change the imbalance also help with starting your career as a DJ?
I think mostly my friends, especially Puneh and DJ AOL, helped me to start djing, because without them, I would have been way too shy to play in front of people. But as soon as I became part of Possy and Headshell (which members are also my friends), I tasted blood and couldn’t stop anymore. Still, I don’t think that the urge to change the imbalance helped me to start my work as a DJ, but rather helped me with my work as a promoter and maybe helped other DJ’s. Because one big idea I became aware of since working with Possy or other feminist collectives is, that everyone should rather support each other instead of starting a competition.

Would you agree that right now, the industry is at a transition point to gain a better balance? And do you have any thoughts on how a world, in which only the music you play or produce matters, could become reality – especially regarding the unbreakable fame of Instagram?
Yes, I think there’s a transition point right now, but I’m not sure if the intention behind it is always a better balance or maybe just promotion. And sometimes, I’m really annoyed because I realize, that some requests only reach me or Possy because they want „a woman” (or POC or whatever) to play their party. But I think if you communicate it the right way, you can play such gigs anyways and it will help people thinking about the imbalance nevertheless. And they will hopefully see that they can book women, trans*, non-binary people, POC’s or other marginalized groups for the music they play. And not for their gender, skin colour, etc. But I think as long as we live in a patriarchy, unfortunately it will not be only the music that matters.

Concerning Instagram: Unfortunately, as a person in public, you always have to present yourself. Still, for me, it’s also interesting who is standing behind the music, because I also want to know their political views for example. So I don’t know if it’s really desireable to completely detach the music from the person. But of course, the music should always have first priority and not some Instagram narrative someone made up to promote themselves. 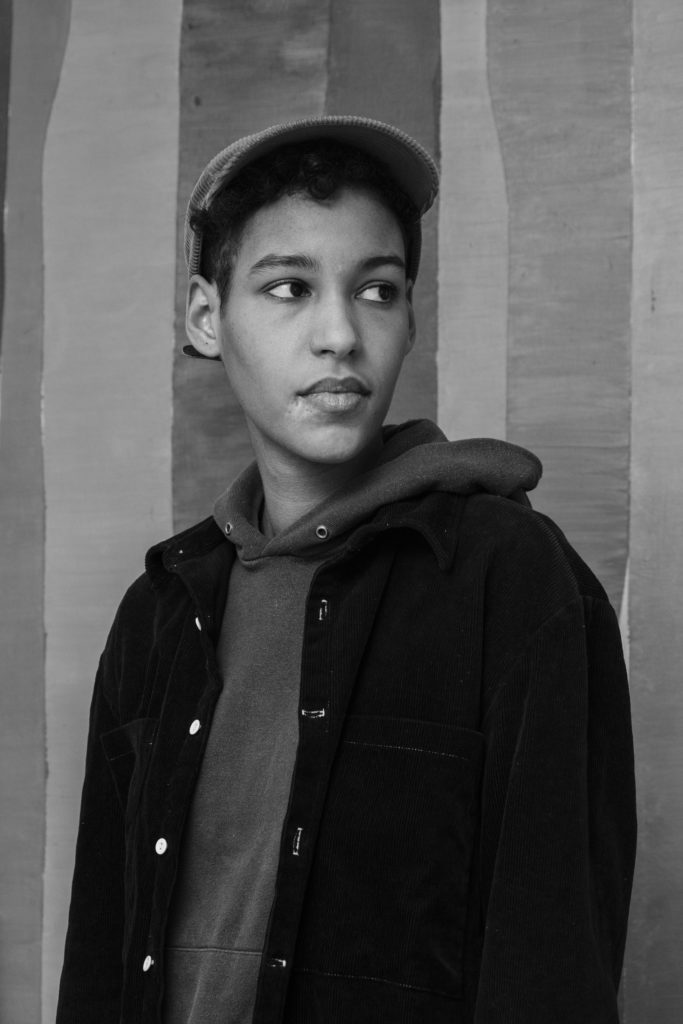 How does your perfect pre-gig-day look? How do you prepare? And how much time are you investing in preparing a set in general?
The best bet is not to be hungover and to sleep well and eat a lot. And preferably, I eat and chill with friends before going to the club. During the day, I just listen to my records and pack everything in order, so I vaguely know where to take a look if a track pops up in my mind during the set.

In the beginning, I always prepared the whole set, so it took like three to four hours or maybe even more. But in the end, I never played like I packed, but at least had the safety. Today, I just dig through my records and pack everything I’m in the mood for. Also, I pack my record case so damn full each and every time that I have a relatively large choice during the set. And then I just play what’s right in the moment. In the end, I probably can’t really plan that at home anyways.

Which ingredients does a proper DJ mix need for you? Is there something you’re always considering when compiling a mix? And did you have any concrete thoughts in mind for your TISSUE?
For me, a proper mix needs an arc of suspense. I don’t know if others can hear it in my mixes, but mostly I start with a track that awakes expectations and then I work my way up to something that I always put together with catharsis in my mind. Maybe that sounds a bit exaggerated. [laughs] For the end of the mix, I tend to choose a melancholic good-bye-track. And of course, I try to put some new or rare tracks in there, that not too many people have heard yet. But that also comes naturally, because my latest records are of course the most exciting ones to play, so I’m integrating them into my mixes automatically.

Last but not least: Where can we catch you soon behind the decks and are there any other musical projects you wanna tell us about already?
I’ll play at the „30 Jahre Flora” party on November 1st with my fellow Possy member Agrodolce and Hypatia from Berlin. I’m really looking forward to it because I think Hypatia is very cool.

Introduction jingle by Harmony Horizon
Words by Nadja Preyer
Cover art by Johanna Jaskowska & Rayan Nohra Errechidi
Portrait by Sophie Allerding
Please note: Big servers and streamed data are eating up energy. And our planet. So do the world a favor: Download the mix and play it on your own device. Keep mother earth alive. Thank you.