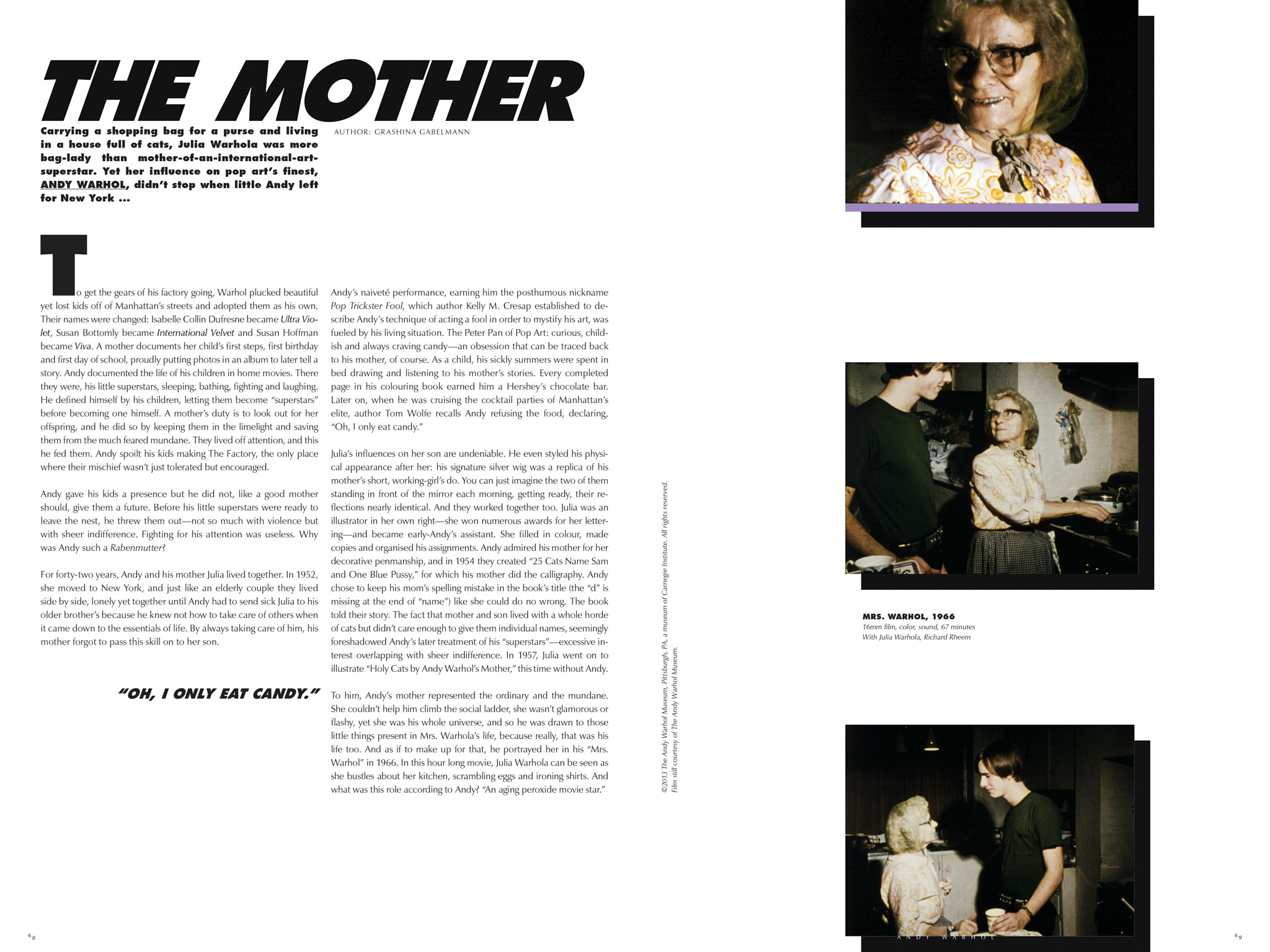 Carrying a shopping bag for a purse and living in a house full of cats, Julia Warhola was more bag-lady than mother-of-an-international-art-superstar. Yet her influence on pop art’s finest, Andy Warhol, didn’t stop when little Andy left for New York …

An article about Andy Warhol’s mother Julia Warhola by Grashina Gabelmann as published in TISSUE N°3 in February 2013:

To get the gears of his factory going, Warhol plucked beautiful yet lost kids off of Manhattan’s streets and adopted them as his own. Their names were changed: Isabelle Collin Dufresne became Ultra Violet, Susan Bottomly became International Velvet and Susan Hoffman became Viva. A mother documents her child’s first steps, first birthday and first day of school, proudly putting photos in an album to later tell a story. Andy documented the life of his children in home movies. There they were, his little superstars, sleeping, bathing, fighting and laughing. He defined himself by his children, letting them become “superstars” before becoming one himself. A mother’s duty is to look out for her offspring, and he did so by keeping them in the limelight and saving them from the much feared mundane. They lived off attention, and this he fed them. Andy spoilt his kids making The Factory, the only place where their mischief wasn’t just tolerated but encouraged.

Andy gave his kids a presence but he did not, like a good mother should, give them a future. Before his little superstars were ready to leave the nest, he threw them out—not so much with violence but with sheer indifference. Fighting for his attention was useless. Why was Andy such a Rabenmutter?

For forty-two years, Andy and his mother Julia lived together. In 1952, she moved to New York, and just like an elderly couple they lived side by side, lonely yet together until Andy had to send sick Julia to his older brother’s because he knew not how to take care of others when it came down to the essentials of life. By always taking care of him, his mother forgot to pass this skill on to her son.

Andy’s naiveté performance, earning him the posthumous nickname Pop Trickster Fool, which author Kelly M. Cresap established to describe Andy’s technique of acting a fool in order to mystify his art, was fueled by his living situation. The Peter Pan of Pop Art: curious, childish and always craving candy—an obsession that can be traced back to his mother, of course. As a child, his sickly summers were spent in bed drawing and listening to his mother’s stories. Every completed page in his colouring book earned him a Hershey’s chocolate bar. Later on, when he was cruising the cocktail parties of Manhattan’s elite, author Tom Wolfe recalls Andy refusing the food, declaring, “Oh, I only eat candy.”

Julia’s influences on her son are undeniable. He even styled his physical appearance after her: his signature silver wig was a replica of his mother’s short, working-girl’s do. You can just imagine the two of them standing in front of the mirror each morning, getting ready, their reflections nearly identical. And they worked together too. Julia was an illustrator in her own right—she won numerous awards for her lettering—and became early-Andy’s assistant. She filled in colour, made copies and organised his assignments. Andy admired his mother for her decorative penmanship, and in 1954 they created “25 Cats Name Sam and One Blue Pussy,” for which his mother did the calligraphy. Andy chose to keep his mom’s spelling mistake in the book’s title (the “d” is missing at the end of “name”) like she could do no wrong. The book told their story. The fact that mother and son lived with a whole horde of cats but didn’t care enough to give them individual names, seemingly foreshadowed Andy’s later treatment of his “superstars”—excessive interest overlapping with sheer indifference. In 1957, Julia went on to illustrate “Holy Cats by Andy Warhol’s Mother,” this time without Andy.

To him, Andy’s mother represented the ordinary and the mundane. She couldn’t help him climb the social ladder, she wasn’t glamorous or flashy, yet she was his whole universe, and so he was drawn to those little things present in Mrs. Warhola’s life, because really, that was his life too. And as if to make up for that, he portrayed her in his “Mrs. Warhol” in 1966. In this hour long movie, Julia Warhola can be seen as she bustles about her kitchen, scrambling eggs and ironing shirts. And what was this role according to Andy? “An aging peroxide movie star.”