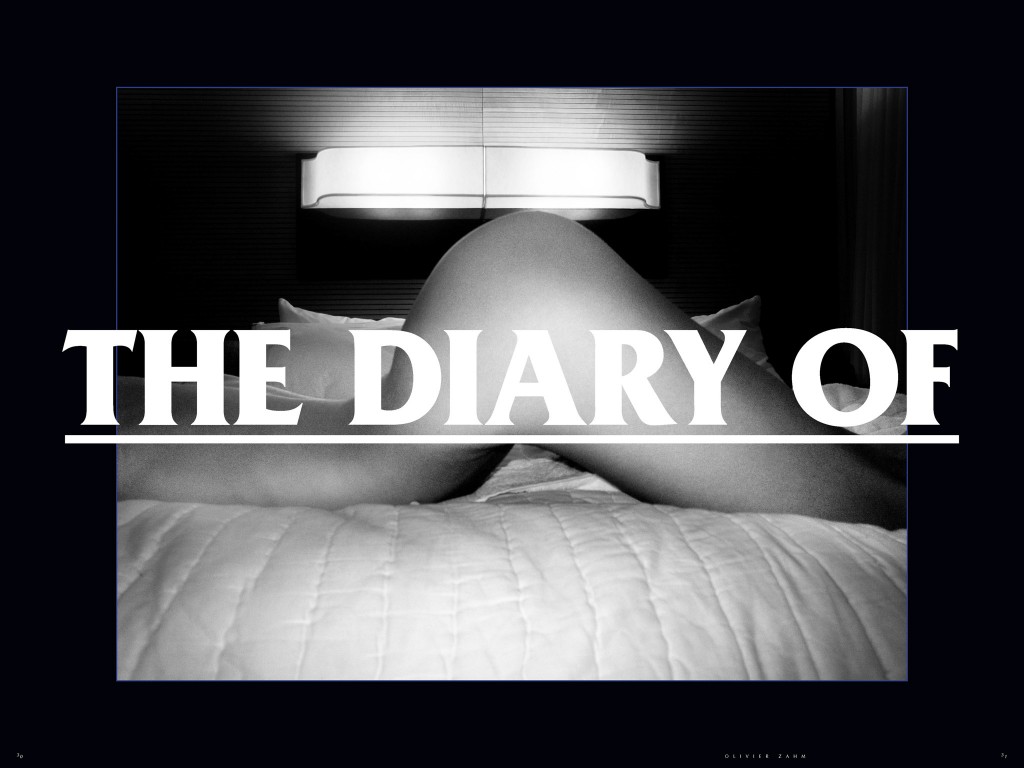 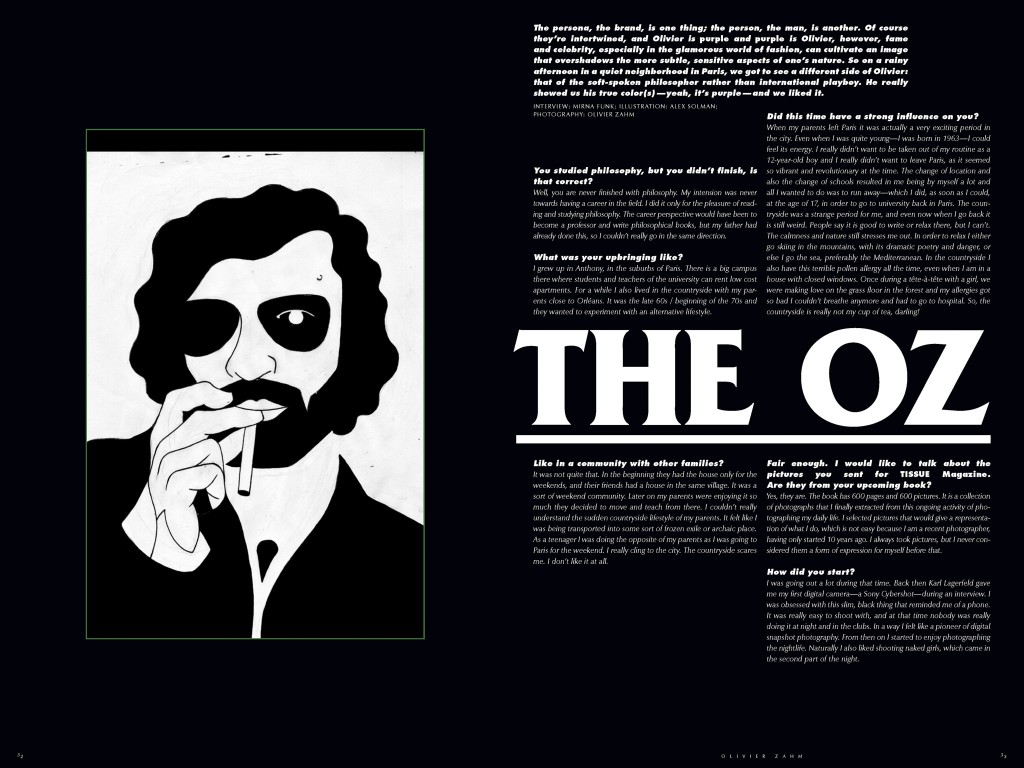 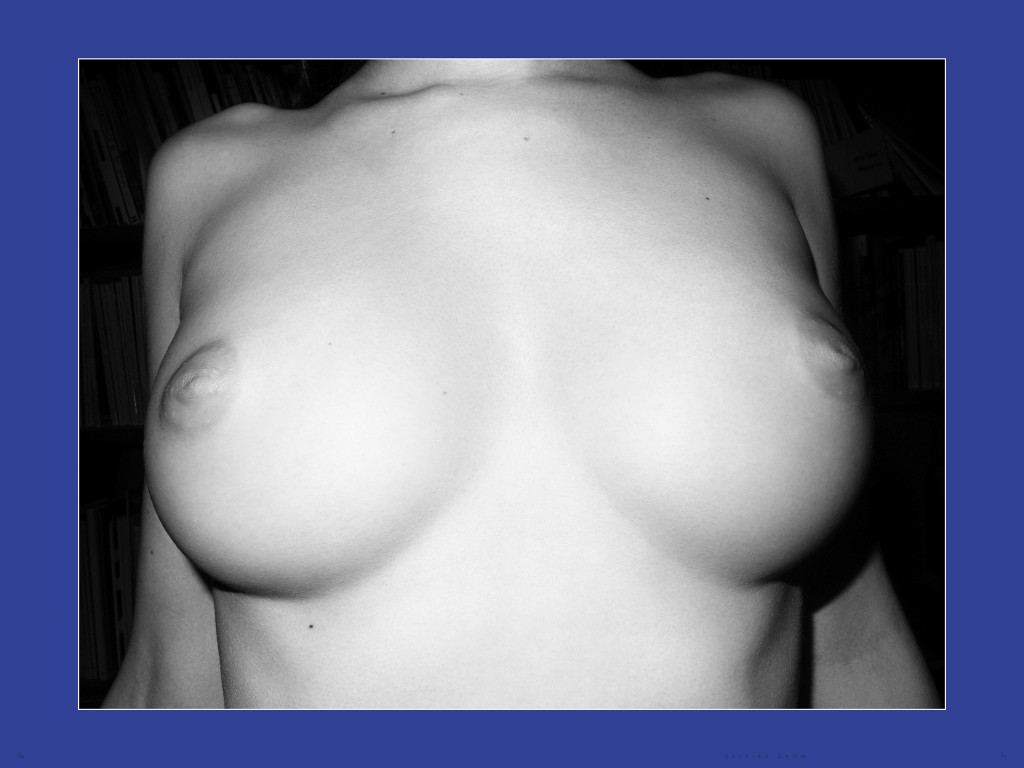 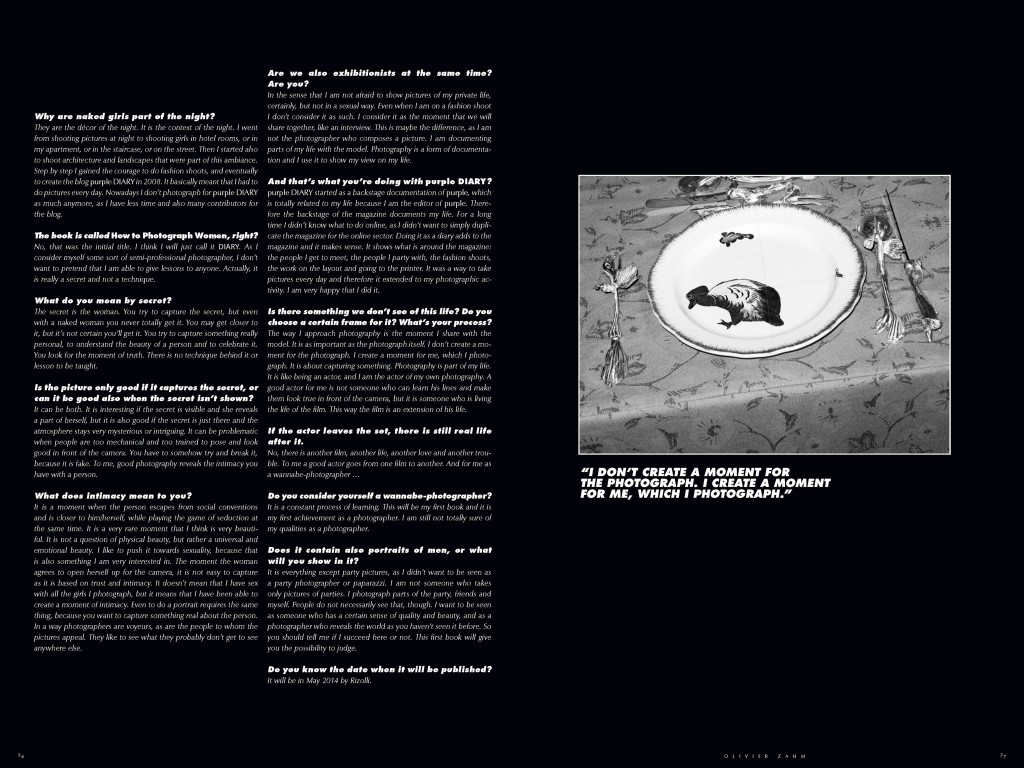 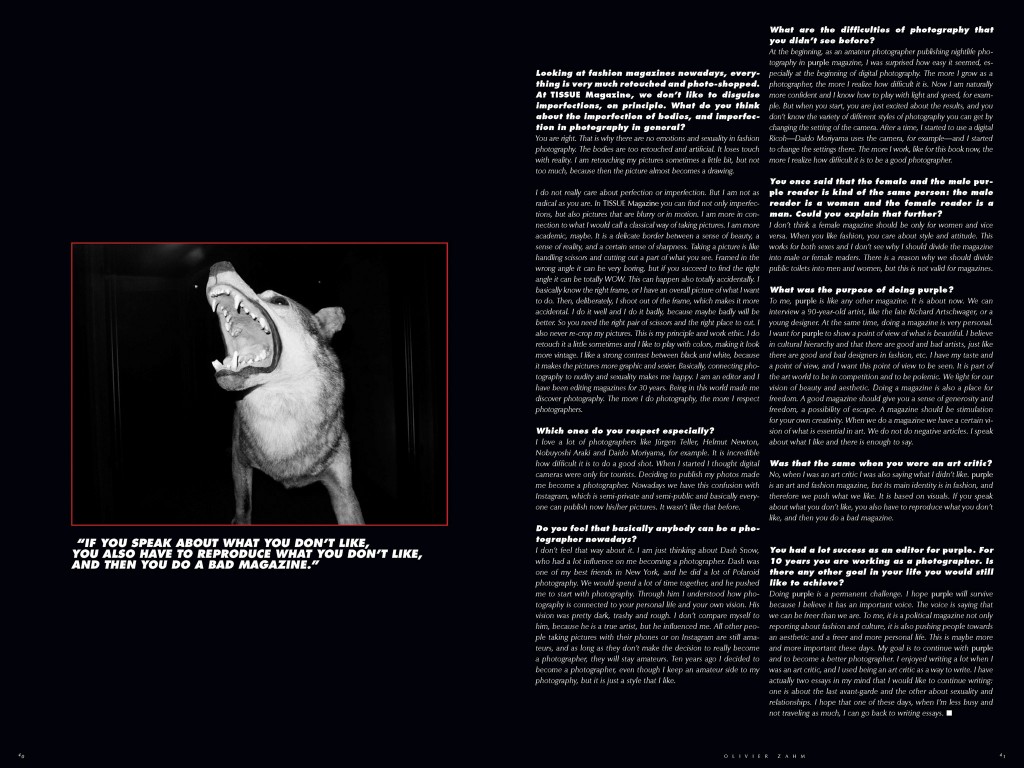 The persona, the brand, is one thing; the person, the man, is another. Of course they’re intertwined, and Olivier is purple and purple is Olivier, however, fame and celebrity, especially in the glamorous world of fashion, can cultivate an image that overshadows the more subtle, sensitive aspects of one’s nature.So on a rainy afternoon in a quiet neighborhood in Paris, we got to see a different side of Olivier: that of the soft-spoken philosopher rather than international playboy. He really showed us his true color(s)—yeah, it’s purple—and we liked it.

Interview with Olivier Zahm
as published in TISSUE N°4 November 2013:

You studied philosophy, but you didn’t finish, is that correct?
Well, you are never finished with philosophy. My intension was never towards having a career in the field. I did it only for the pleasure of reading and studying philosophy. The career perspective would have been to become a professor and write philosophical books, but my father had already done this, so I couldn’t really go in the same direction.

What was your upbringing like?
I grew up in Anthony, in the suburbs of Paris. There is a big campus there where students and teachers of the university can rent low cost apartments. For a while I also lived in the countryside with my parents close to Orléans. It was the late 60s / beginning of the 70s and they wanted to experiment with an alternative lifestyle.

Like in a community with other families?
It was not quite that. In the beginning they had the house only for the weekends, and their friends had a house in the same village. It was a sort of weekend community. Later on my parents were enjoying it so much they decided to move and teach from there. I couldn’t really understand the sudden countryside lifestyle of my parents. It felt like I was being transported into some sort of frozen exile or archaic place. As a teenager I was doing the opposite of my parents as I was going to Paris for the weekend. I really cling to the city. The countryside scares me. I don’t like it at all.

Did this time have a strong influence on you?
When my parents left Paris it was actually a very exciting period in the city. Even when I was quite young—I was born in 1963—I could feel its energy. I really didn’t want to be taken out of my routine as a 12-year-old boy and I really didn’t want to leave Paris, as it seemed so vibrant and revolutionary at the time. The change of location and also the change of schools resulted in me being by myself a lot and all I wanted to do was to run away—which I did, as soon as I could, at the age of 17, in order to go to university back in Paris. The countryside was a strange period for me, and even now when I go back it is still weird. People say it is good to write or relax there, but I can’t. The calmness and nature still stresses me out. In order to relax I either go skiing in the mountains, with its dramatic poetry and danger, or else I go the sea, preferably the Mediterranean. In the countryside I also have this terrible pollen allergy all the time, even when I am in a house with closed windows. Once during a tête-à-tête with a girl, we were making love on the grass floor in the forest and my allergies got so bad I couldn’t breathe anymore and had to go to hospital. So, the countryside is really not my cup of tea, darling!

Fair enough. I would like to talk about the pictures you sent for TISSUE Magazine. Are they from your upcoming book?
Yes, they are. The book has 600 pages and 600 pictures. It is a collection of photographs that I finally extracted from this ongoing activity of photographing my daily life. I selected pictures that would give a representation of what I do, which is not easy because I am a recent photographer, having only started 10 years ago. I always took pictures, but I never considered them a form of expression for myself before that.

How did you start?
I was going out a lot during that time. Back then Karl Lagerfeld gave me my first digital camera—a Sony Cybershot—during an interview. I was obsessed with this slim, black thing that reminded me of a phone. It was really easy to shoot with, and at that time nobody was really doing it at night and in the clubs. In a way I felt like a pioneer of digital snapshot photography. From then on I started to enjoy photographing the nightlife. Naturally I also liked shooting naked girls, which came in the second part of the night.

Why are naked girls part of the night?
They are the décor of the night. It is the context of the night. I went from shooting pictures at night to shooting girls in hotel rooms, or in my apartment, or in the staircase, or on the street. Then I started also to shoot architecture and landscapes that were part of this ambiance. Step by step I gained the courage to do fashion shoots, and eventually to create the blog purple DIARY in 2008. It basically meant that I had to do pictures every day. Nowadays I don’t photograph for purple DIARY as much anymore, as I have less time and also many contributors for the blog.

The book is called How to Photograph Women, right?
No, that was the initial title. I think I will just call it DIARY. As I consider myself some sort of semi-professional photographer, I don’t want to pretend that I am able to give lessons to anyone. Actually, it is really a secret and not a technique.

What do you mean by secret?
The secret is the woman. You try to capture the secret, but even with a naked woman you never totally get it. You may get closer to it, but it’s not certain you’ll get it. You try to capture something really personal, to understand the beauty of a person and to celebrate it. You look for the moment of truth. There is no technique behind it or lesson to be taught.

Is the picture only good if it captures the secret, or can it be good also when the secret isn’t shown?
It can be both. It is interesting if the secret is visible and she reveals a part of herself, but it is also good if the secret is just there and the atmosphere stays very mysterious or intriguing. It can be problematic when people are too mechanical and too trained to pose and look good in front of the camera. You have to somehow try and break it, because it is fake. To me, good photography reveals the intimacy you have with a person.

What does intimacy mean to you?
It is a moment when the person escapes from social conventions and is closer to him/herself, while playing the game of seduction at the same time. It is a very rare moment that I think is very beautiful. It is not a question of physical beauty, but rather a universal and emotional beauty. I like to push it towards sexuality, because that is also something I am very interested in. The moment the woman agrees to open herself up for the camera, it is not easy to capture as it is based on trust and intimacy. It doesn’t mean that I have sex with all the girls I photograph, but it means that I have been able to create a moment of intimacy. Even to do a portrait requires the same thing, because you want to capture something real about the person. In a way photographers are voyeurs, as are the people to whom the pictures appeal. They like to see what they probably don’t get to see anywhere else.

Are we also exhibitionists at the same time?
Are you?
In the sense that I am not afraid to show pictures of my private life, certainly, but not in a sexual way. Even when I am on a fashion shoot I don’t consider it as such. I consider it as the moment that we will share together, like an interview. This is maybe the difference, as I am not the photographer who composes a picture. I am documenting parts of my life with the model. Photography is a form of documentation and I use it to show my view on my life.

And that’s what you’re doing with purple DIARY?
purple DIARY started as a backstage documentation of purple, which is totally related to my life because I am the editor of purple. Therefore the backstage of the magazine documents my life. For a long time I didn’t know what to do online, as I didn’t want to simply duplicate the magazine for the online sector. Doing it as a diary adds to the magazine and it makes sense. It shows what is around the magazine: the people I get to meet, the people I party with, the fashion shoots, the work on the layout and going to the printer. It was a way to take pictures every day and therefore it extended to my photographic activity.
I am very happy that I did it.

Is there something we don’t see of this life? Do you choose a certain frame for it? What’s your process?
The way I approach photography is the moment I share with the model. It is as important as the photograph itself. I don’t create a moment for the photograph. I create a moment for me, which I photograph. It is about capturing something. Photography is part of my life. It is like being an actor, and I am the actor of my own photography. A good actor for me is not someone who can learn his lines and make them look true in front of the camera, but it is someone who is living the life of the film. This way the film is an extension of his life. If the actor leaves the set, there is still real life after it. No, there is another film, another life, another love and another trouble. To me a good actor goes from one film to another. And for me as a wannabe-photographer …

Does it contain also portraits of men, or what will you show in it?
It is everything except party pictures, as I didn’t want to be seen as a party photographer or paparazzi. I am not someone who takes only pictures of parties. I photograph parts of the party, friends and myself. People do not necessarily see that, though. I want to be seen as someone who has a certain sense of quality and beauty, and as a photographer who reveals the world as you haven’t seen it before. So you should tell me if I succeed here or not. This first book will give you the possibility to judge.

Do you know the date when it will be published?
It will be in September 2014 by Rizzoli. 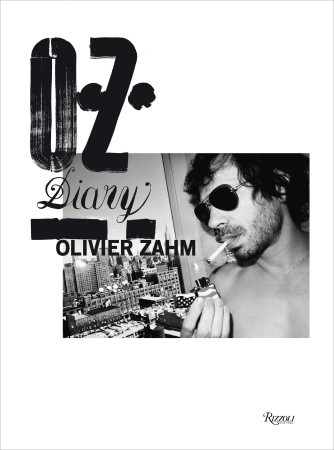