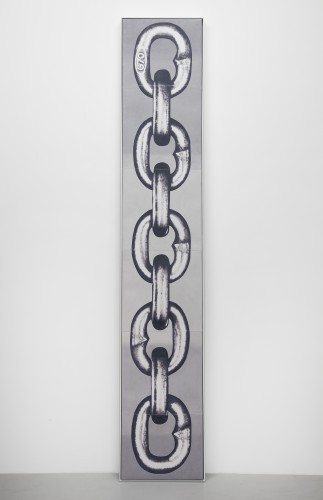 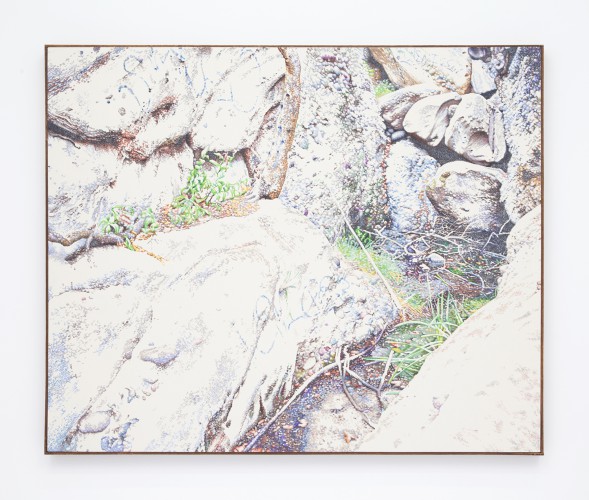 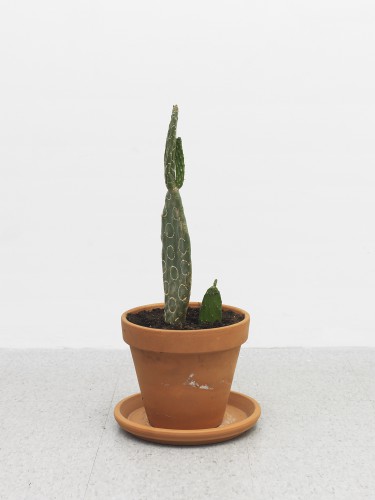 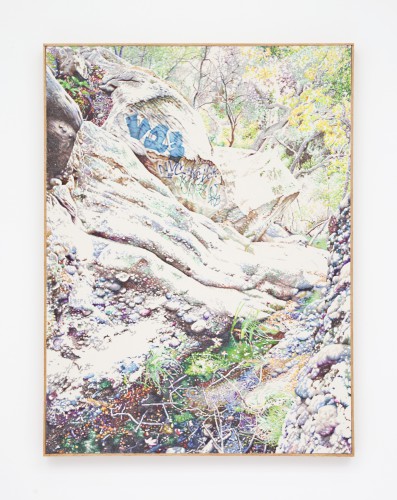 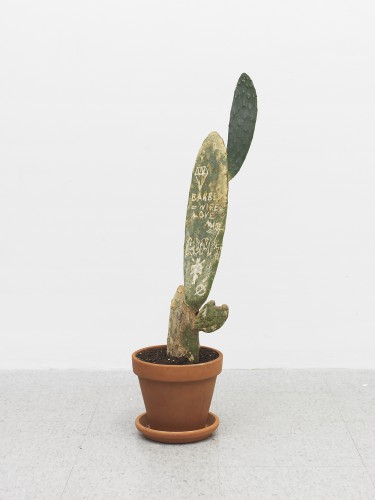 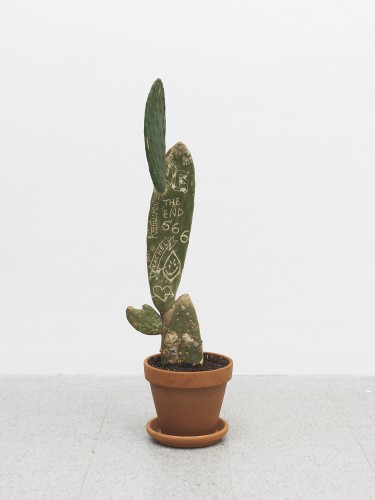 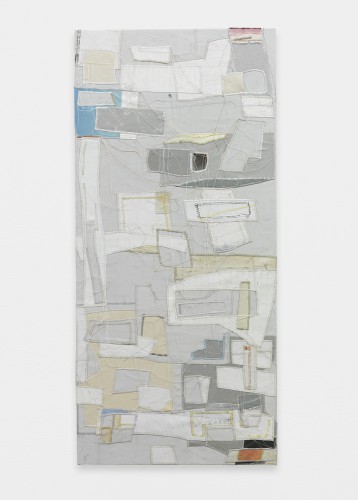 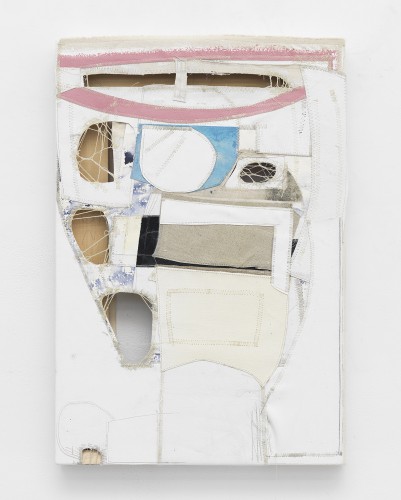 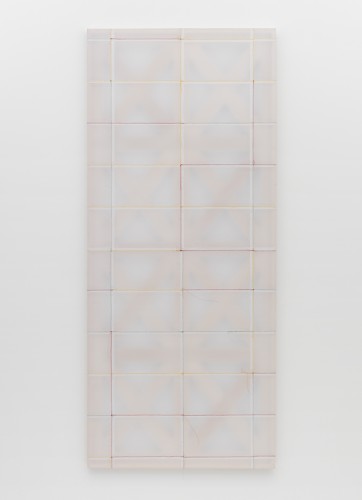 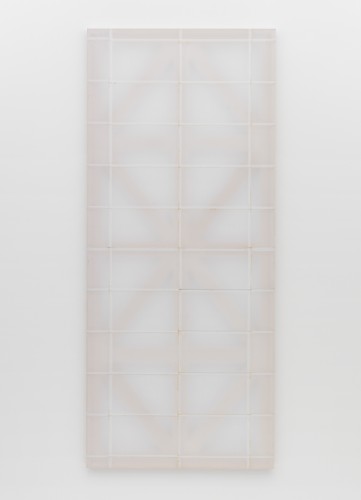 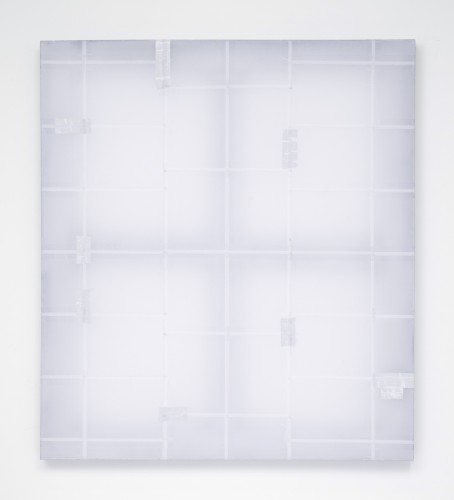 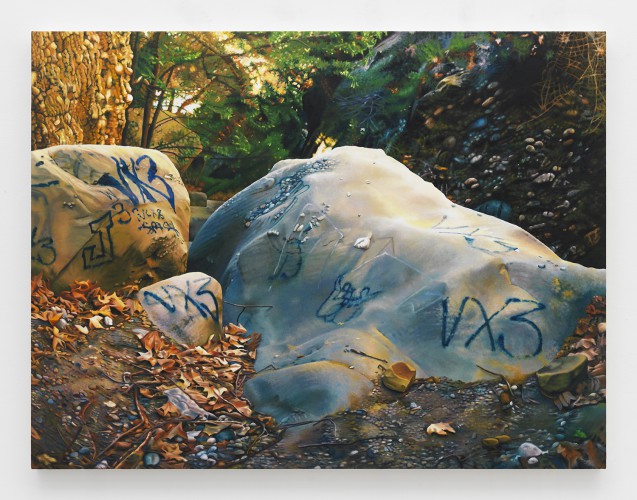 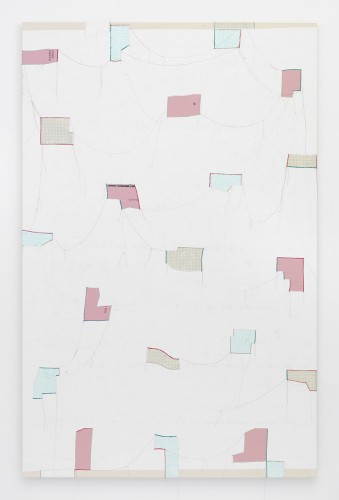 Jack Greer is a multidisciplinary fine artist with a versatile body of work. He looks like he is fully with art – he takes it very seriously and spends most of his time in his studio – at the end of the day being an artist is a job. Greer is very structural with what he does, he constructs, maintains, and occasionally deconstructs. He considers his work as more positive than negative, Greer said he just prefers to spend his time finding what is right but at the same time clarifies that he ‘doesn’t have the authority to tell the people what to feel and what to see’, but I don’t think that there are any wrong reasons for liking or disliking something. All of us, when we see something, are bound to be reminded of a hundred-and-one things which influence our likes and dislikes and Greer is really kind of positive in that way – looking at his work will give you more pleasant than unpleasant feelings.

Jack Greer originates from LA but after his graduation he moved to New York to study at Pratt Institute, where he enrolled as a drawing major. Until this day NY is still his home, he perfectly summarized the thing saying: ‘The roots grow deeper as the time goes on’. We saw Greer’s work in NY as we attented his July’s solo show opening Landmark at Howard St, now few months later we sat down with him and discussed everything art.

What does your art mean to you? What is it all about? I mean, what are you trying to achieve with your art?
Figure out the best avenues/mediums to put the voices in my head into the physical realm.

Gauguin once said that the art was inside his head and nowhere else. Is your work a manifestation of your fantasies?
The fantasy is the result of an application of mediums onto a surface: the ideas in my work are often an attempt to gather and archive the literal overlapping of circumstances and spaces of individuals in this world – in the landscape, the studio, the conversation. The gap between the archive and my interpretation of it is where the fantasy exists.

What do you think makes an artist?
A sperm and an egg and some questions about the world.

Your opus of works varies. Drawings, paintings, sculpture, photography…. People normally think of themselves as either painters or sculptors but you talked about how you sometimes see this as craftsmanship, as if you know your hands can do something, you then do it. Tell me more.
Mediums have different purposes for different people. To some, they have a particular medium they wish to explore a series of ideas through. For others, they have a selection of mediums they choose to explore a particular idea.  Each medium has an inherent way in which it is hoping to be used by my hands.  Drawing is linear, hard, tight, controlled.  Sculpture is to be confronted, walked around, and feel physically substantial. A sculpture is, by virtue of me being a human, a human as well.  Although it may be a cactus in a pot, I walk up to this object as a figure. Paint is wet color.  Photography is moments.  I return to similar topics in my practice, however, the exploration of those topics is rendered through different mediums because of the way in which the information is collected. In order to create a landscape that has been traversed by groups of individuals leaving marks on the rocks, I draw the way a landscape painter or map maker would – the precise documentation of information in the scene is the depiction of the concept.  Conversely, the sewing together of portions of other artists discarded material is the tapestry in which an archive of shared space is represented.  The concept of developing an archive of individuals is concurrent through both.  The process of creating different forms of archives changes as the source material gathered is inherently asking for different compositional techniques.

Cy Twombly once said: ‘I don’t do drawings when I paint. It’s another state of mind, I think.’ What’s your take on that?
I work on one piece at a time, from start to finish. I’m quite systematic, organized, and regimented in my practice.  I don’t have a room of unfinished things – once I focus on a particular project, I like to sit with it until it is complete and then move onto the next.

Do you think you have certain cycles within your own work? When you look back at your work do you see one phase followed by another?
I jump back and forth between different projects that I foresee taking different amounts of time to complete.  I can’t happily work on a painting for four months only to turn around and jump directly into another one upon its completion. I like to work on fast projects, slow projects, and medium length projects in no particular order but without making too much of any one kind before switching into one of the others. In terms of the imagery and concepts within each of those pieces there are definitely decisions made based on the mental and physical circumstances of my life.  While focusing primarily on sewn works in 2014, I found myself working on two contrasting compositions – one chaotic and one systematically organized, both based on feelings coming out of a relationship. Although the sewn works were not about a breakup, the compositions I created during a time of mental strife were layered quite differently than the later pieces I began making upon finding order.

Is your process intuitive or carefully planned?
The process is dictated by the way in which I use a particular medium. I do a lot of planning when I’m going to take on a painting project.  When I’m sewing, I often build a composition based on the previous patch I’ve sewn down – a composition that is built out of intuition and the ability to greatly affect the results with additive and reductive processes throughout. Installations are a little of both – there’s a toolbox of objects with a general plan to which the space informs how the objects are going to live.

Your work has of course changed over the years, which is a natural progression. What do you think caused this change? Perhaps a greater feeling of freedom?
Gathering experiences and allowing them to inform an ever changing understanding of what it is to be, to make.  To find the best possible techniques for communicating images and ideas to a public.

Do you ever get so frustrated and angry while working that you just toss everything away and go: fuck you and you and you… fuck everything….
No.

How do you know a piece is finished? Is the end about achieving a certain kind of feeling in the paintings?
Obviously one may ruin a piece by working it too far or stopping too early. The piece might be successful at 70% the artists eventual stopping point, but that would be a different piece entirely.  Therefore, the completed piece is the only piece because any other iteration of said piece would not be that piece at all. Although there would be aesthetic similarities, the intent of the artist must be trusted. A piece of art may only be aesthetically considered in the state that it exists. Two points can make a line but what’s the success in drawing a line if you’re trying to convey a circle.  Conversely, the concept of a piece of art has the ability to maintain across a changing aesthetic.  An example of this is John Baldessari’s text painting which receives an additional row of text upon each exhibition of it. Although the aesthetic is affected by the addition of paint to the surface, the initial concept for this work is not.

So who do you make paintings for?
People.

What about paintings titles… Does the title come while your working?
Some series have a system in which all titles correspond to the initial concept behind the work – i.e. all patchwork pieces were given a name of a real person somehow involved in my life.  Other series have more factually based titles such as the name of the hiking location in which a landscape was documented.

What’s your studio time like? Are you one of those people that spend lot’s of time just sitting around thinking prior working on a piece or the opposite?
Peanut Butter Jelly and Banana toast with coffee and then a lot of work.  The thinking is usually done while out and about participating in the other parts of life – the studio is more of a one-man factory in which I go about producing those ideas.

You also mentioned that sometimes you just put on Netflix while working and just listen… Don’t you ever get distracted by other people talking? Distracted in a way you want to see what you have been listening to the whole time and you just postpone your work for a bit?
I don’t listen too intently – I just like the voices and stories of people helping to fill my ears while I work.  I’m quite focused while working and therefore having a little noise in the background helps remind me of the existence of the world outside my head.

Do you care about how people perceive your art?
I do my best to communicate a concept but the interpretation is open ended.

You said that you prefer to spend your time finding what’s right, rather than be bothered with the negativity….  Do you think you are anywhere near?
It’s easier to be a critic of people than to celebrate them. There’s more wrong out there than what’s right. That being said, do you want to swallow a bunch of shit all the time or taste something good.

You also photograph a lot. Do you deal with photography and art in the same way?
Everything is woven together for one epic story that is a life’s work.

When you left Los Angeles for New York did you intend to stay in NY or that just happened?
I knew I wanted to see more than where I was raised and I’m still hoping to see more.  So much of my practice is contingent upon the understanding of how individuals communicate – my work has the opportunity to grow through sharing experiences with more people.

You are a skateboarder – a very decent one if you ask me – so yeah, I was wondering how come you never dived into skateboarding professionally?
Not good enough, thankfully. I enjoy being capable of coming along for the ride without relying on my performance as an occupation.

Do you believe in love?
Yes.

What is your favorite curse word?
Nothing stands out.

What’s the next step?
I look forward to finding out. 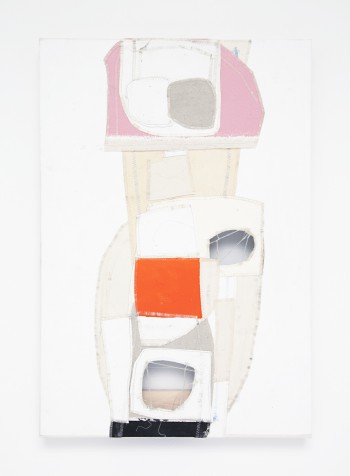 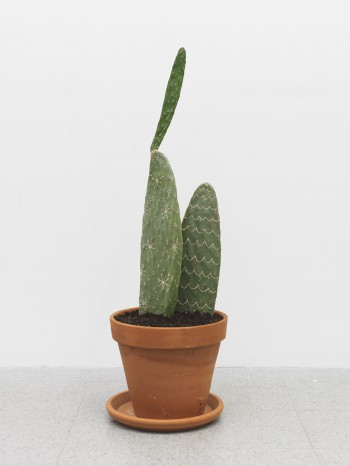 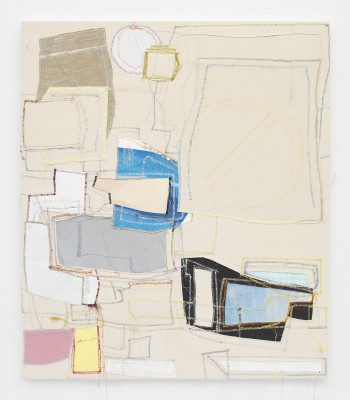 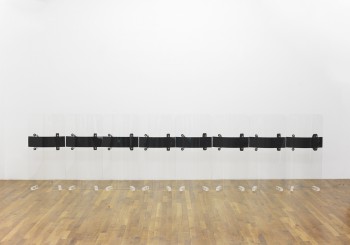 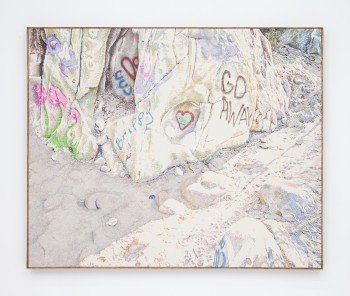 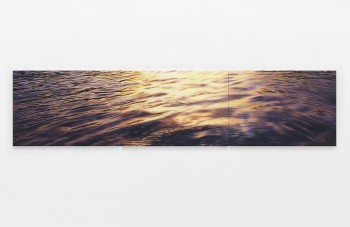 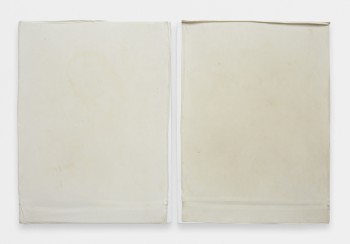 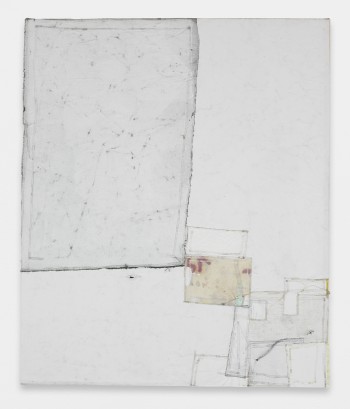 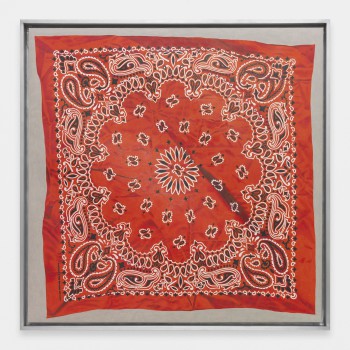 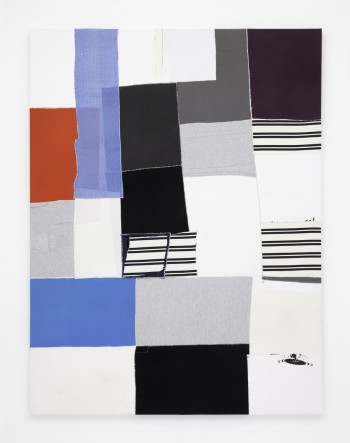 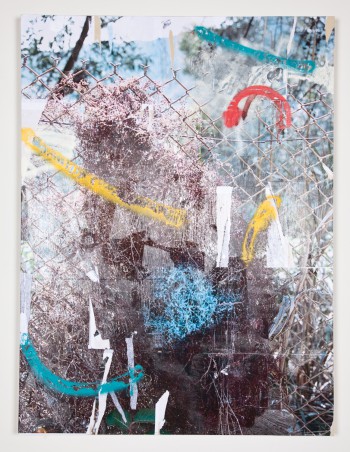 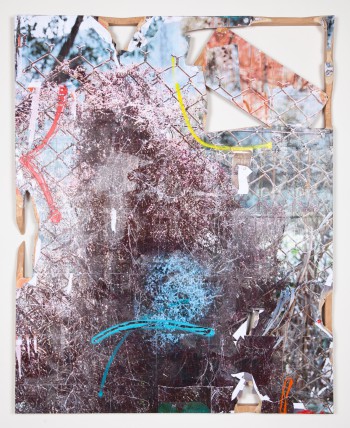 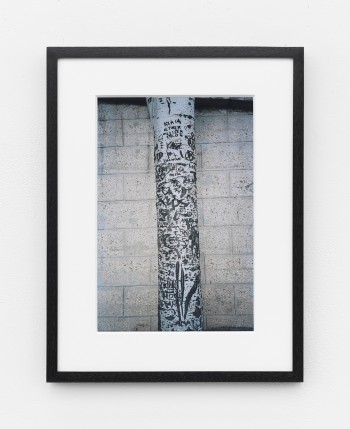 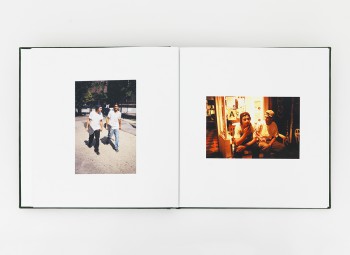 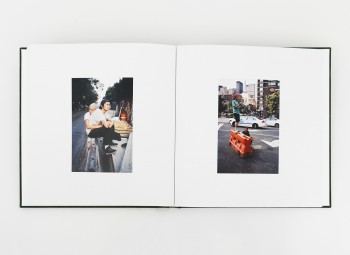 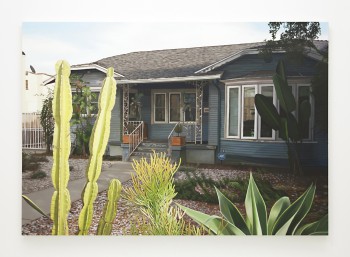