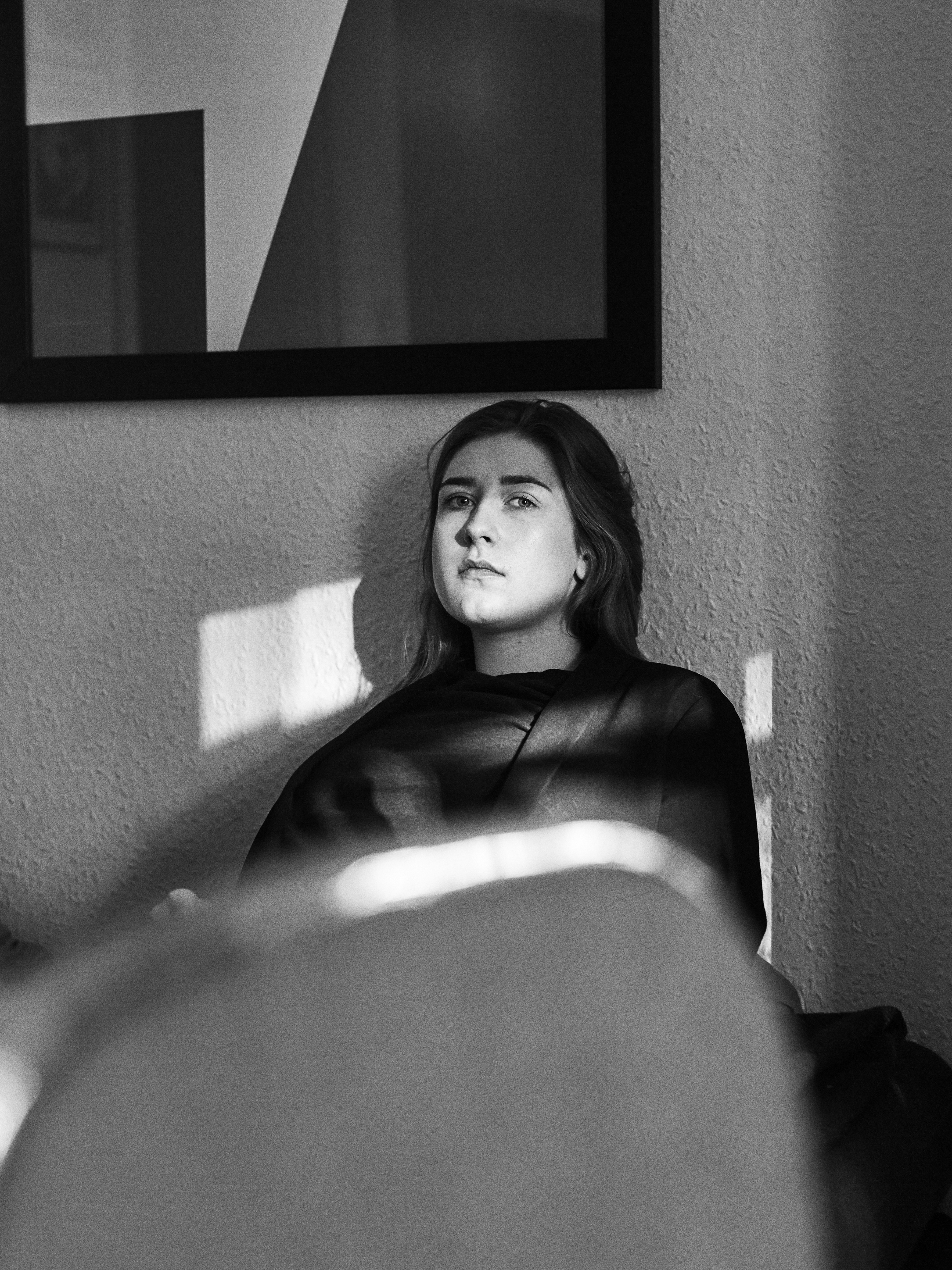 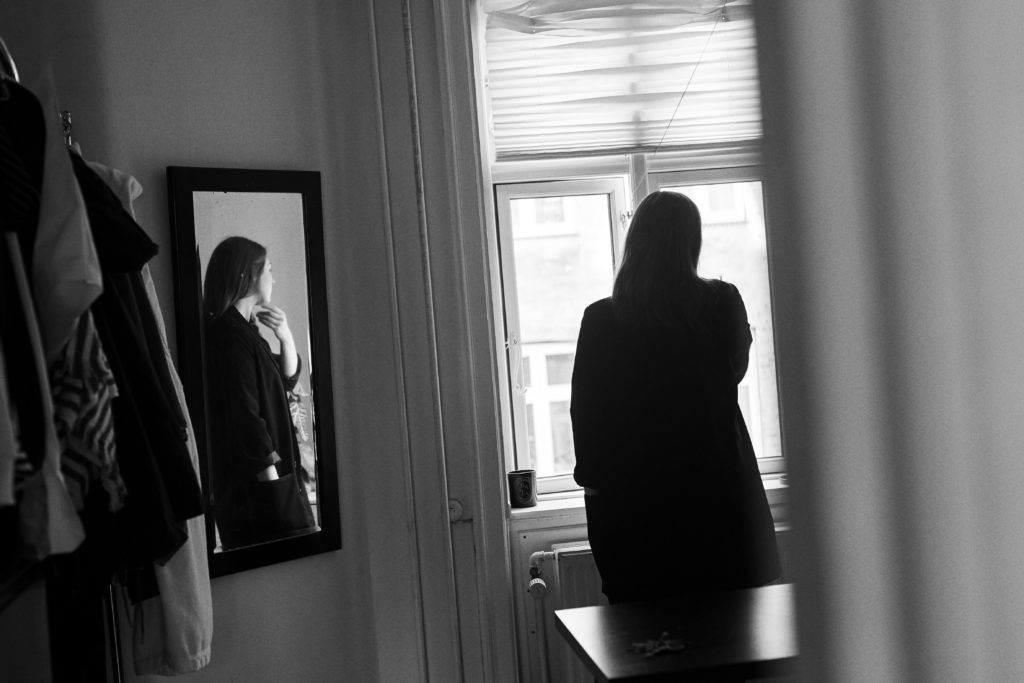 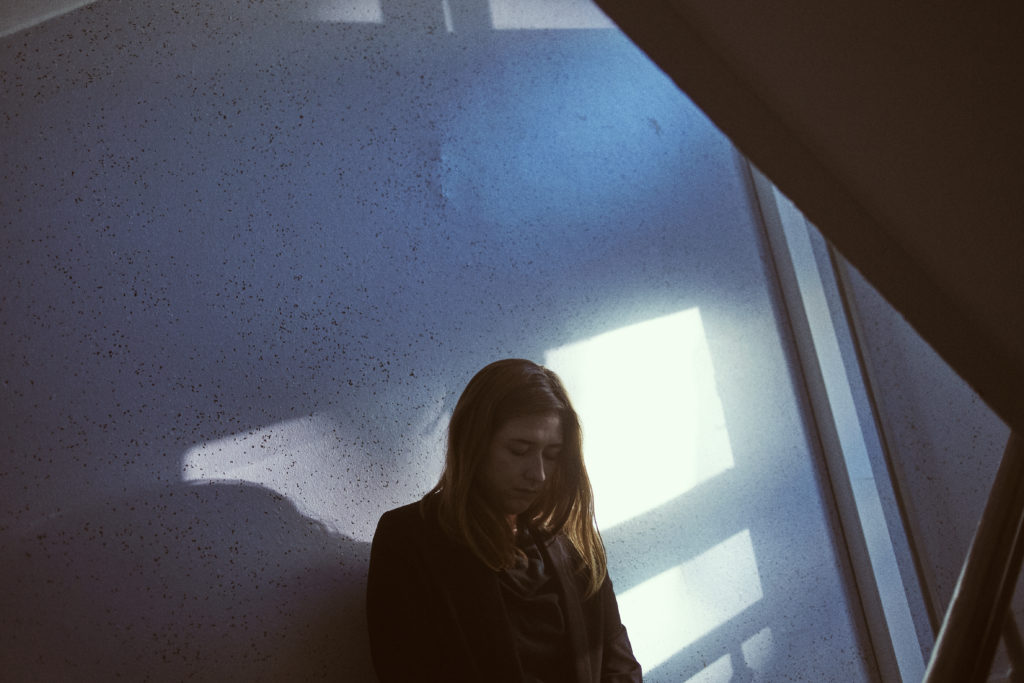 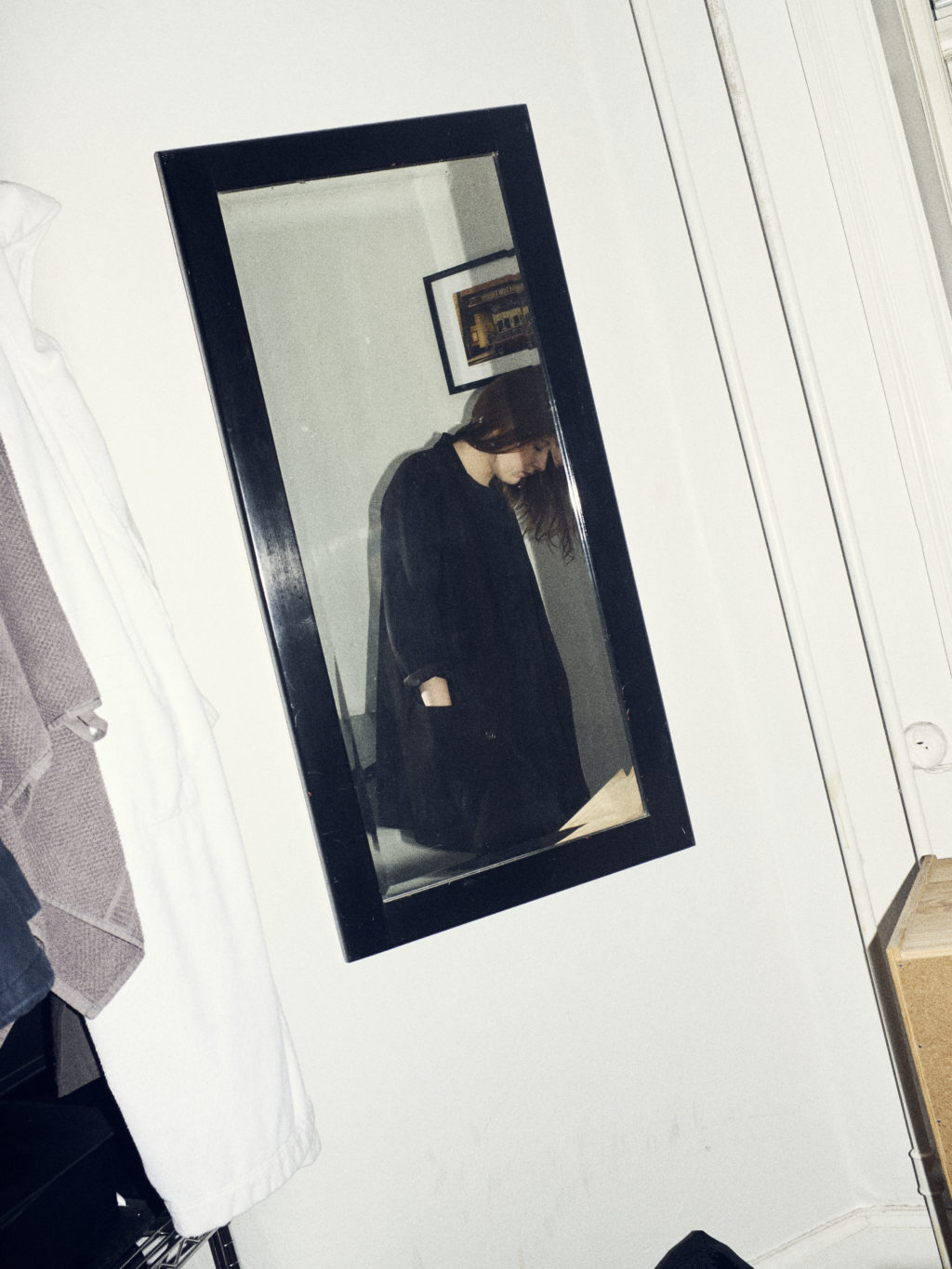 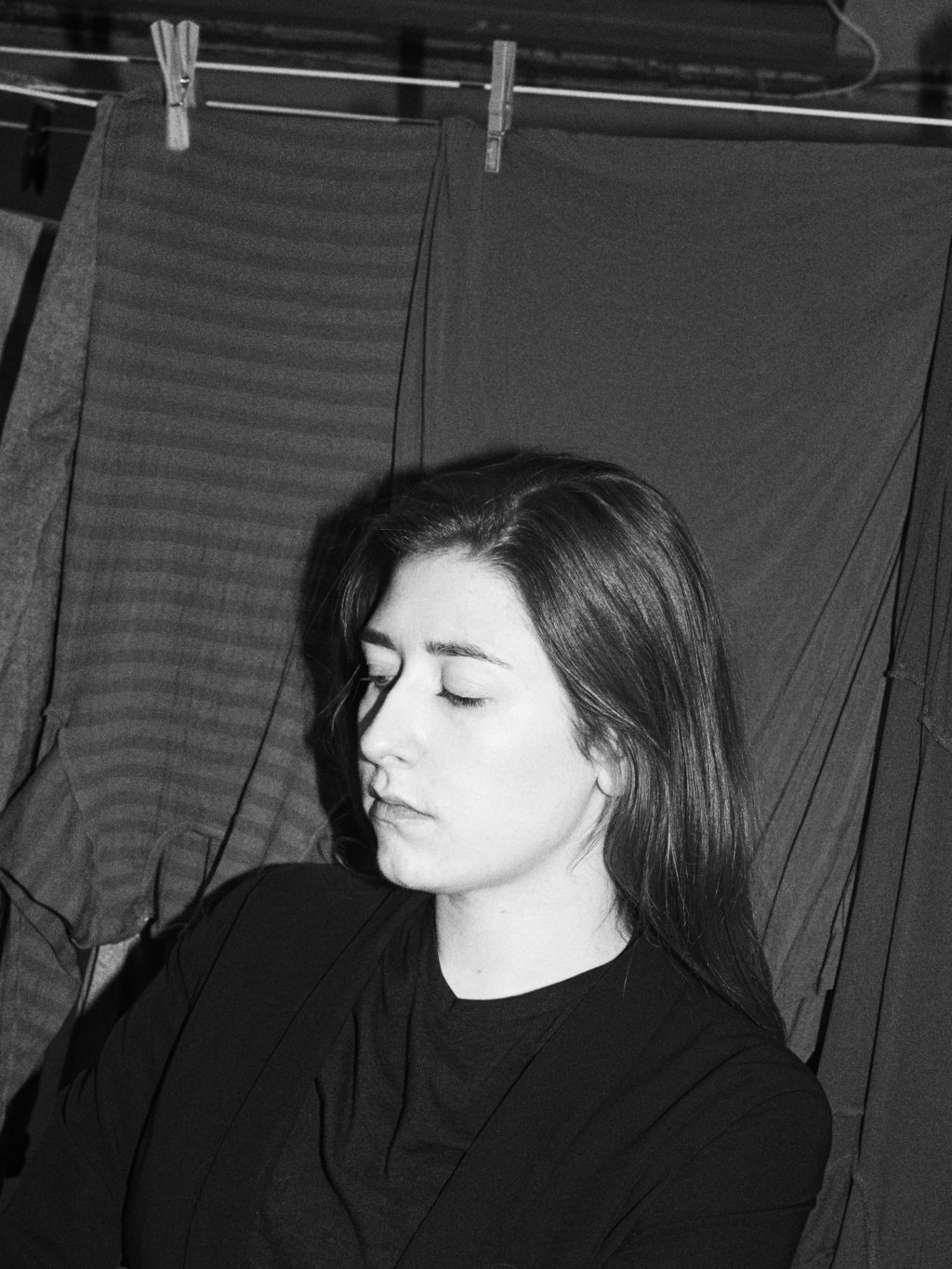 Often mistaken for a Dane, her cute Scottish accent reveals the Copenhagen-based DJ’s true background. A place that has definitely also affected her music style. Known for being a part of the now retired Apeiron Crew, Glaswegian Emma Blake aka Solid Blake has had a packed but succesful year touring with Modeselektor, traveling for gigs all around Europe, participating in Redbull Music Academy and recently she just wrapped the year early with the release of her 2nd solo EP on Seilscheibenpfeiler

TISSUE Magazine had a chat with the contagious happy DJ about having a dad that knows what it means to play in Berghain and handling Brexit as a Scot living in Denmark.

Emilie: When did you start liking techno?
Emma: I started sneaking into clubs at about 14 or 15. Then when I got to university I started volunteering at Subcity, a community radio station based at the university. But I didn’t start DJing there. I remember friends trying to encourage me to apply for my own show, but I never had the nerve to do it at that time.

So how did your techno career suddenly unfold in Copenhagen?
When I graduated in 2011 and moved to Copenhagen, I continued going out and listening to music as before, but something changed when I was here, around the time I started working in Dorma [the record shop in Copenhagen]. I wouldn’t say chasing music as something professional – it was more like the passion never went away, whatever else I was pursuing. And I realized it was a good idea to step out of my comfort zone a bit and actually contribute somehow, rather than just to be the person going to the party in the background. I don’t know what it was that I was worried about, but I was just scared to do that before. It was never that much of a plan, but somehow studying philosophy and ending up being a DJ makes some sense as my narrative.

And then you became a part of Apeiron Crew. How was that experience?
It was an amazing thing to be a part of – to feel the support of those around me and have started something together. Not that it wasn’t serious, because it was, but the mood of what we were presenting was very much driven by fun. It had its downsides, but it was also a really safe environment for us to try things out. It really helped me develop what I want to do on my own as well, so when it came time to focus on our solo projects I felt ready to pursue that stuff too.

So when did Solid Blake come into the picture?
In 2015 or 2016. It was a bit of a joke to begin with. You know, a silly video game reference that fit with my interests and also fit very well with the names of the other members of the crew. It was easy to have a fun pseudonym when we all had them. And then that developed to something else when I started making music more seriously. Somehow everything I was making fit into that world. The development felt like growing up in a way. A bit of a period of adolescence where my twenties developed into the project and the character that I am now.

Does the name reflect you as solid as in tough?
I think for me it is more about, you know, it is a reference to Metal Gear Solid and the main character is called Solid Snake… so it is just as simple as that. But the game is absolutely amazing, and because I am interested in those kinds of things it is also a bit of a call to people who know it and understand it as an interest of mine and that it fits into the music somehow. But although the music can be quite rough, there’s a cheeky reference to something else in there which I like.

Do you play the game?
It’s unhealthy for me to have a console at home because I’d get addicted. But I loved it when I played it for the first time – the gameplay but also just the whole aesthetic of it. That’s why I like to use little game references throughout my work. I try to keep those references subtle enough, it’s never meant to be too much of a pastiche or rip-off of anything.

In spring or early summer you played Berghain for first the time. How was that?
It was fun. Being a part of the tour with the Modeselektion compilation meant that I felt very much part of a big team of people who were all there to have fun together.  It was nice to be able to talk to my dad about it. This world often seems very big to people who are in it, so it’s good to remember that this is still very much a subculture. It can be tricky to explain the significance of certain things to people who are outside of that bubble. But when I told my dad that I was playing there, there was a nice moment of mutual understanding because it has this mythology that precedes it.

You just released your second solo EP Warp Room on Seilscheibenpfeiler. How do you feel about that?
I started with a track on a V/A record on the label Brokntoys, and it was actually the first track that I had ever finished on my own. I put it in a mix and they ended up finding it there, so it was a really rewarding feeling to see it go that way, especially as I was already a big fan of the label. Then I performed a live set at Strøm festival at the Trans Metro Express event, and a friend of mine from Glasgow heard a clip of the set just when he was getting serious about starting a label. That became my first solo EP, Mario, which was released on Outer Zone.

I found it difficult to get started with this one. Partly because I have been travelling a bit more – I had this idea that I could make music when I’m out and about, but it just doesn’t work for me. I think maybe I struggled to get this one out because it felt like everything else was a first time for something and this was the dreaded second record – I think a lot of people have this issue. So it is about establishing what I want to do and what I want to be, or continue to be.

But I ended up really happy with how it turned out, Modeselektor and the team at Seilscheibenpfeiler were really supportive and encouraging though the process when I was putting it together, so over all it was a very positive experience that left me in a good place to start working on the next thing.

What do you think about all the gender talks concerning DJs? And do you think about the fact that you are a female DJ?
I do think about this, yes. I think that a lot of the fallout with these things is down to some people looking at systemic issues and others choosing to focus on their individual issues or experiences – these ways of looking at things are usually incompatible and lead to really unsatisfying and frustrating stalemate situations in discussions.

On Resident Advisor you are listed under Denmark. How do you like to be presented – as Danish or Scottish?
It’s funny, people are often surprised by my accent when I show up. I think that what I do has been formed equally by the time that I lived in Scotland and the time that I have been in Copenhagen. Although the sound that is coming out of Copenhagen now is something that I’m generally grouped into further afield, I think that what I am doing doesn’t quite fit into that, but the city itself and my experiences here have undoubtedly influenced me in the 7 years I’ve been here. At the same time, some of what I do is directly influenced by my early experiences in Glasgow, inspired by people like Optimo and Numbers. In terms of what I am trying to do it is always going to be be something in between those differing influences. But isn’t that what makes something original? I’m not claiming to be groundbreaking in any way, but I do think originality often comes from the space between things already in existence, or from being more than one thing at the same time.

Has Brexit affected you in any way as an British citizen living in Denmark?
I have been having concerns about what will happen with Brexit and my residency in the EU. So I am examining my options right now. I want to stay in Denmark, but it feels more up in the air than ever right now, which is something that I never expected. I always thought that I would always have the free movement granted to me by the EU. I grew up with the idea that I travel to Europe and that is a life choice to be able to move around.

Do you think club culture will keep being popular?
I can’t say what will happen, but I think it is important not to be too concerned about following a trend. Because that will never be rewarding in the long term, and it won’t grant longevity in any kind of work. So I suppose it’s important to look to the future and be aware that whatever is happening now, and in whichever form that is, it will eventually eat itself.

Here on the edge of a brand new year, it definitely is important to look into the future. Hopefully the culture won’t eat itself right away, and hopefully we will have many chances in 2019 to catch Solid Blake behind the decks somewhere in Europe also hoping that Brexit in the end will not have any catastrophic impact on that.