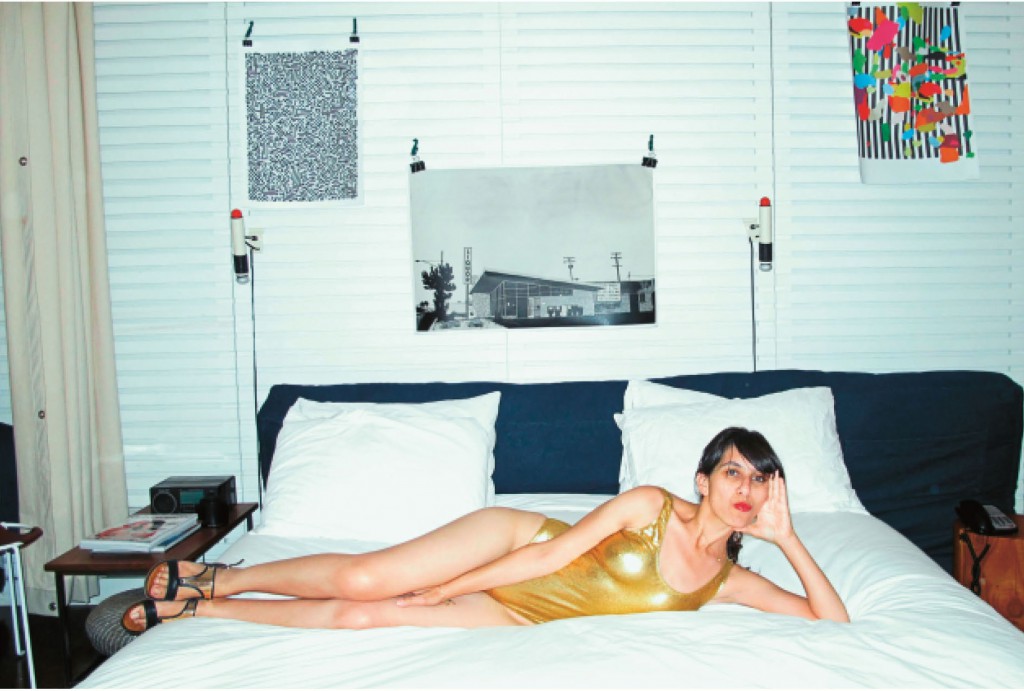 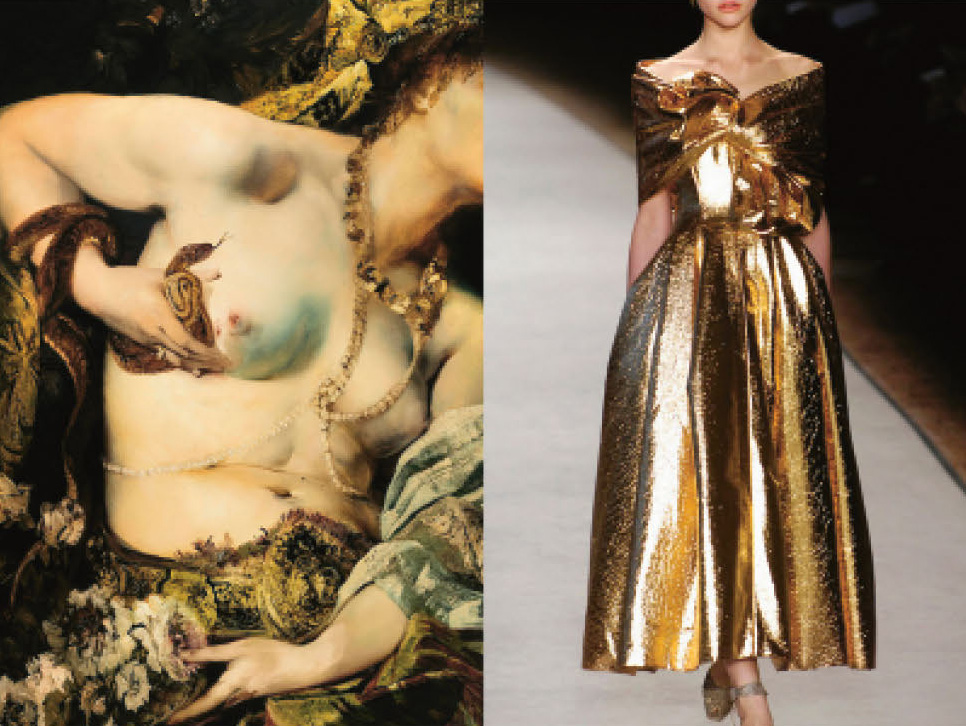 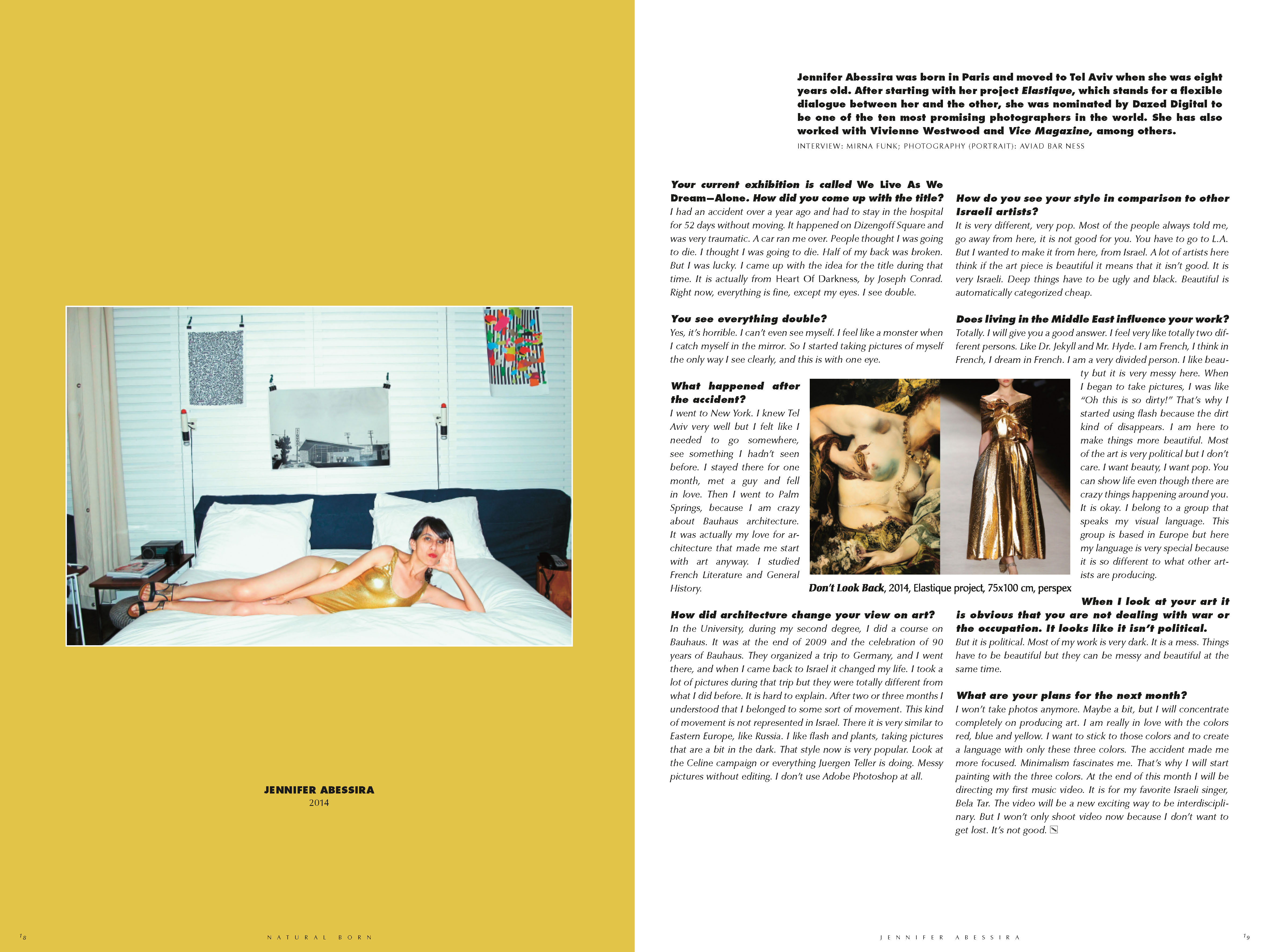 Jennifer Abessira was born in Paris and moved to Tel Aviv when she was eight years old. After starting with her project Elastique, which stands for a flexible dialogue between her and the other, she was nominated by Dazed Digital to be one of the ten most promising photographers in the world. She has also worked with Vivienne Westwood and Vice Magazine, among other.

Your current exhibition is called We Live as We Dream–Alone. How did you come up with the title?
I had an accident over a year ago and had to stay in the hospital for 52 days without moving. It happened on Dizegenoff Square and was very traumatic. A car ran me over. People thought I was going to die. I thought I was going to die. Half of my back was broken. But I was lucky. I came up with the idea for the title during that time. It is actually from Heart of Darkness, by Joseph Conrad. Right now, everything is fine, except my eyes. I see double.

You see everything double?
Yes, it’s horrible. I can’t even see myself. I feel like a monster when I catch myself in the mirror. So I started taking pictures of myself the only way I see clearly, and this is with one eye.

What happened after the accident?
I went to New York. I knew Tel Aviv very well but I felt like I needed to go somewhere, see something I hadn’t seen before. I stayed there for one month, met a guy and fell in love. Then I went to Palm Springs, because I am crazy about Bauhaus architecture. It was actually my love for architecture that made me start with art anyway. I studied French Literature and General History.

How did architecture change your view on art?
In the University, during my second degree, I did a cource on Bauhaus. It was at the end of 2009 and the celebration of 90 years of Bauhaus. They organized a trip to Germany, and I went there, and when I came back to Israel it changed my life. I took a lot of pictures during that trip but they were totally different from what I did before. It is hard to explain. After two or three months I understood that I belonged to some sort of movement. This kind of movement is not represented in Israel. There it is very similar to Eastern Europe, like Russia. I like flash and plants, taking pictures that are a bit in the dark. That style now is very popular. Look at the Celine campaign or everything Juergen Teller is doing. Messy pictures without editing. I don’t use Adobe Photoshop at all.

How do you see your style in comparison to other Israeli artists?
It is very different, very pop. Most of the people always told me, go away from here, it is not good for you. You have to go to L.A. But I wanted to make it from here, from Israel. A lot of artists here think if the art piece is beautiful it means that it isn’t good. It is very Israeli. Deep things have to be ugly and black. Beautiful is automatically categorized cheap.

Does living in the Middle East influence your work?
Totally. I will give you a good answer. I feel very like totally two different persons. Like Dr. Jekyll and Mr. Hyde. I am French, I thinkg in French, I dream in French. I am a very divided person. I like beauty butit is very messy here. When I began to take pictures, I was like “Oh this is do dirty!” That’s why I started using flash because the dirt kind of disappears. I am here to make things more beautiful. Most of the art is very political but I don’t care. I want beauty, I want pop. You can show life even though there are crazy things happening around you. It is okay. I belong to a group that speaks my visual language. This group is based in Europe but here my language is very special because it is so different to that other artists are producing.

When I look at your art it is obvious that you are not dealing with war or the occupation. It looks like it isn’t political.
But it is political. Most of my work is very dark. It is a mess. Things have to be beautiful but they can be messy and beautiful at the same time.

What are your plans for the next month?
I won’t take photos anymore. Maybe a bit, but I will concentrate completely on producing art. I am really in love with the colors red, blue and yellow. I want so stick to those colors and to create a language with only these three colors. The accident made me more focused. Minimalism fascinates me. That’s why I will start painting with three colors. At the end of this month I will be directing my first music video. It is for my favorite Israeli singer, Bela Tar. The video will be a new exciting way to be interdisciplinary. But I won’t only shoot video now because I don’t want to get lost. It’s not good.