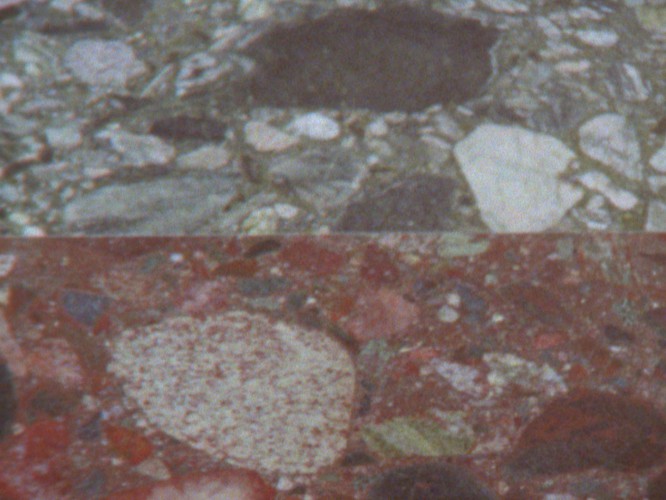 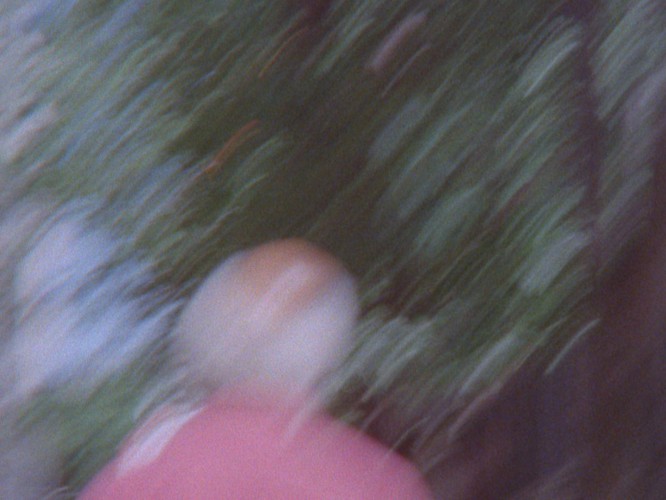 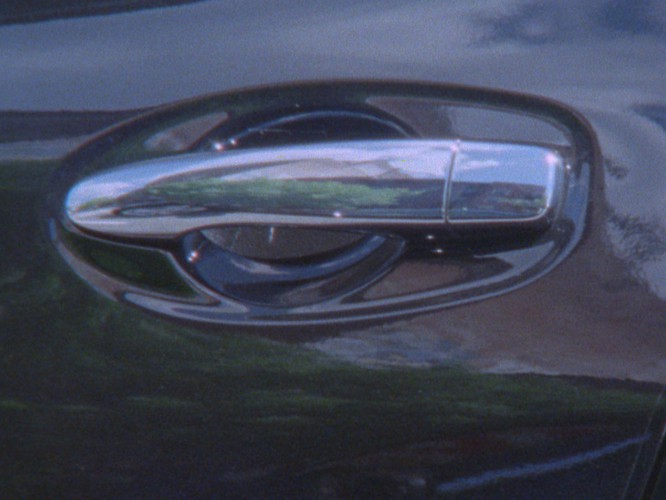 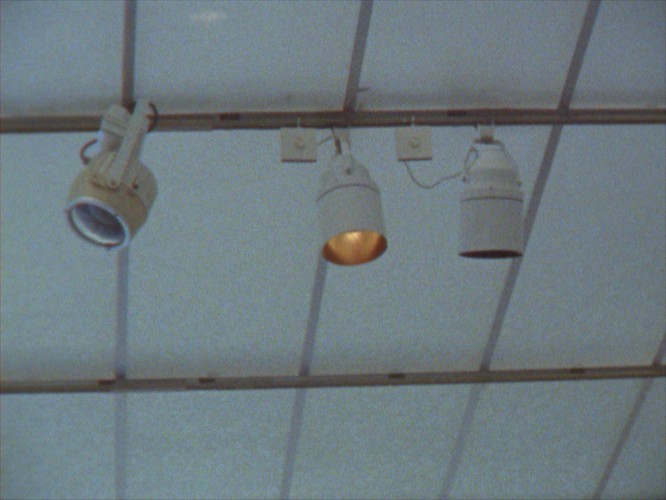 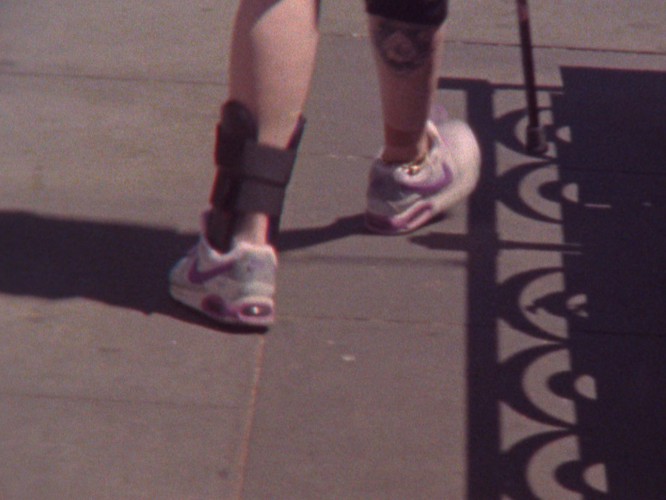 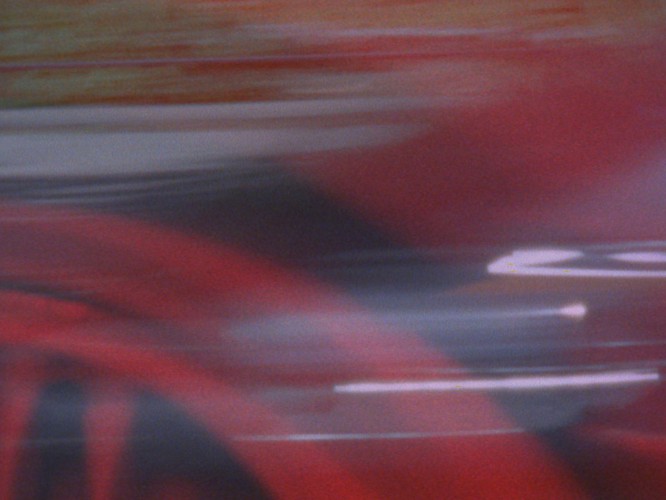 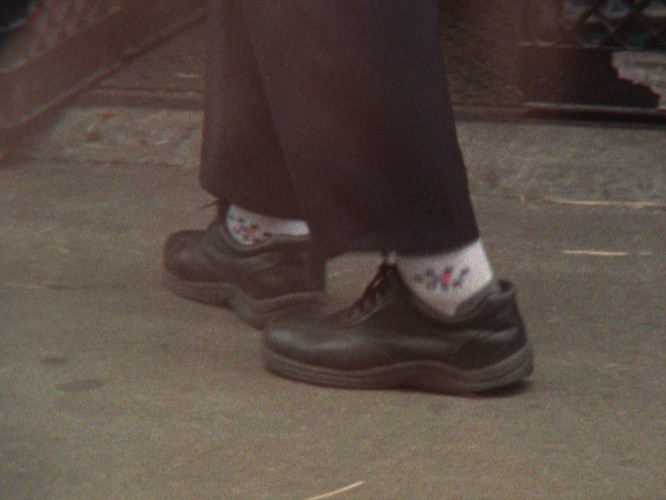 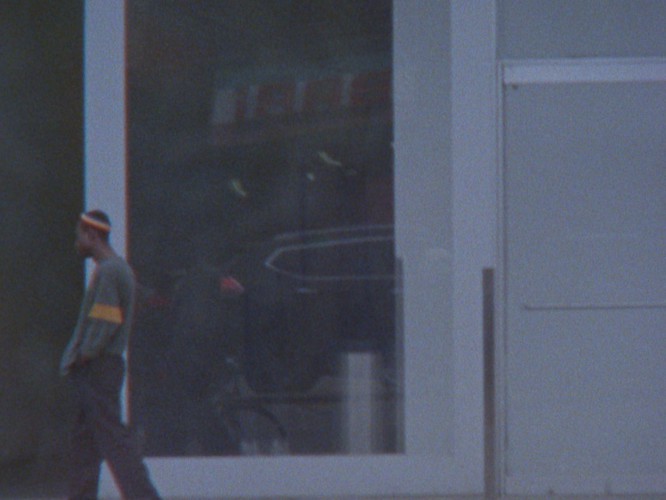 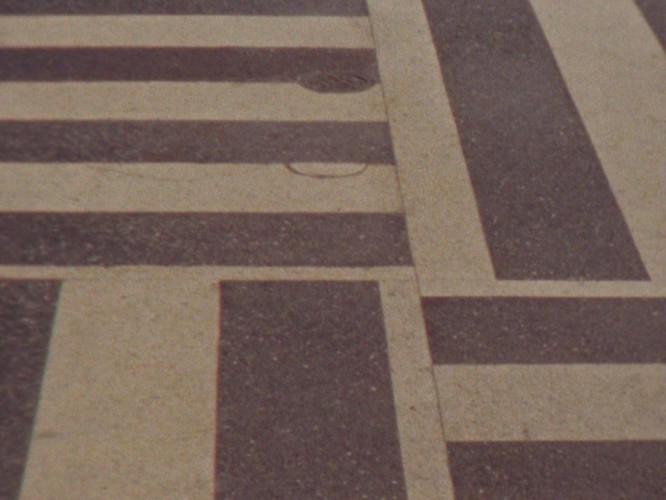 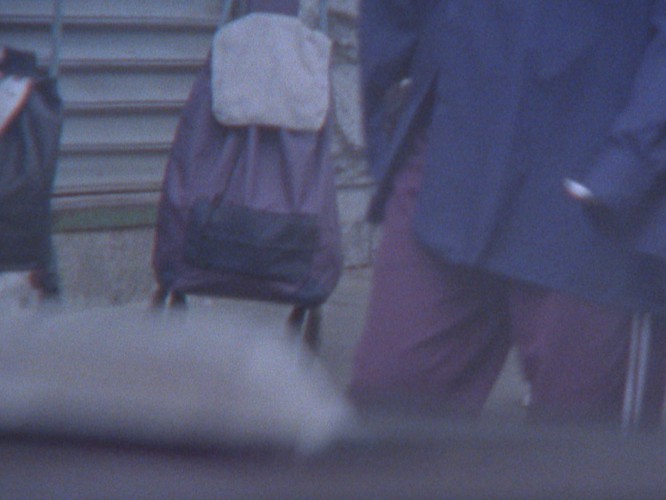 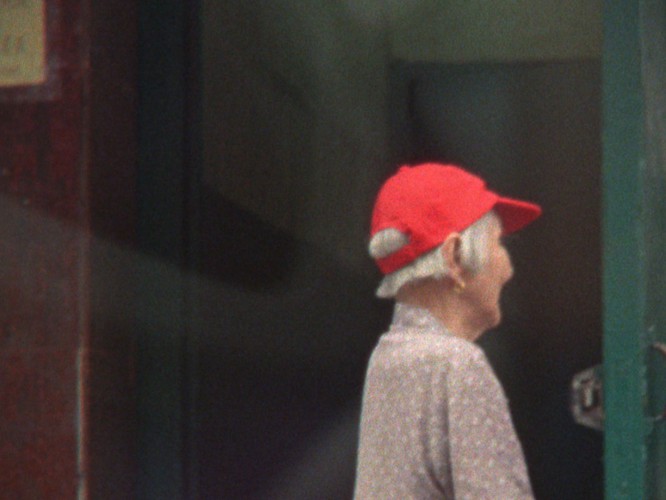 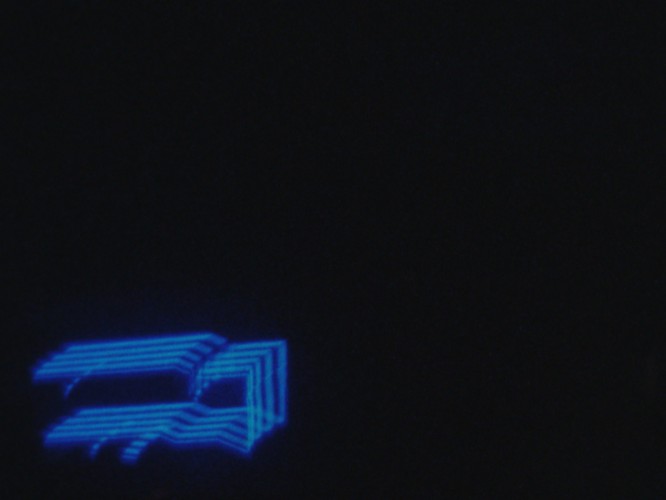 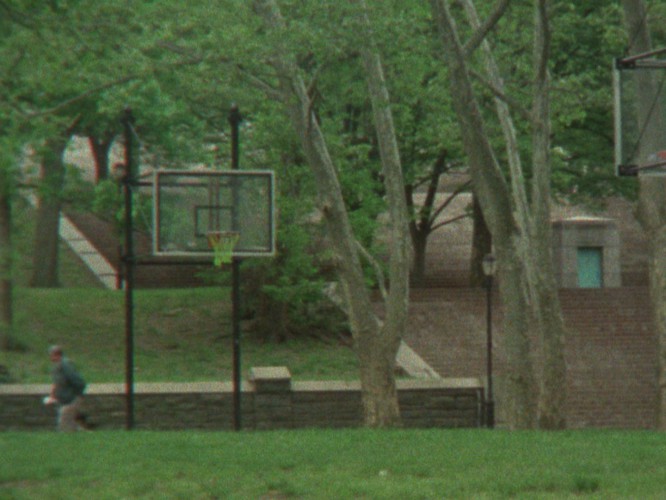 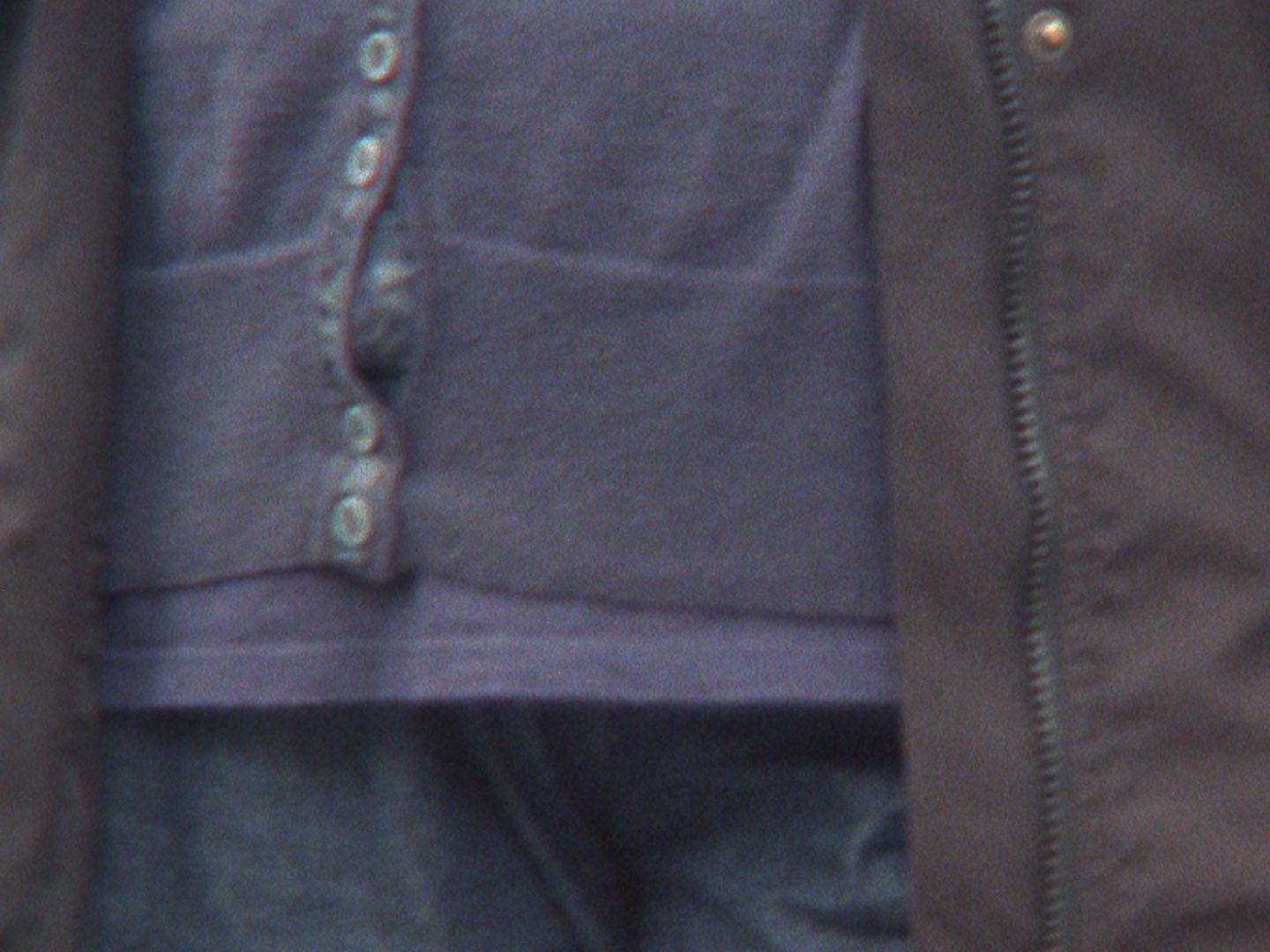 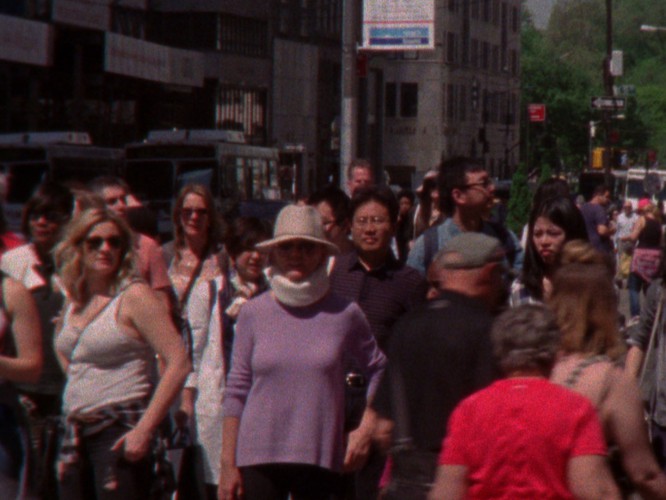 Cleveland born electronic musician and cofounder of the famous “first true post-tourism publication“ The Travel Almanac, John Roberts released his third studio album Plum three months ago on his label Brunette Editions. But instead of presenting Plum with a traditional live performance Roberts has made a series of short movies called Odeon. Plum and Odeon as a whole, world-premiered in Berlins old beautiful Passage Kino in Neukölln, as a part of the Pop-Kultur festival in the beginning of September, for once Roberts could be seen relaxed among the audience at his own show. I met John to a talk about body parts, chance and ambiguity.

Can you call it a movie what you have made to accompany your latest album Plum?
I don’t know if it is really right to call it a movie, because it’s not like a narrative experience it’s more like a visual experience. I have been trying to use the language of film and cinema to do something that is a bit more pumped up.

How come you had this Idea to make this cinematic collage?
The idea was to try something different as a sort of replacement for the types of live performances that I have done in the past. The idea of one person standing on a stage, and then a bunch of other people watching feels outdated to me. Especially with electronic music that is made on the computer, that is so complex to make, to try to deconstruct it and perform it in a way, doesn’t really make sense to me. When I am making my music I am not thinking about my body or my physical form, so I thought I would just delete the body from the equation, as it has nothing to do with what I am doing. But this is just the beginning stages, I am trying to push it further, it’s really a fun experiment. I don’t know what’s coming next but I am working on it.

What is the album about?
It is a formal collection of textures. I was thinking about things in structural terms, like sculpture. Textures, colours, materials, but not about creating a story.

Can you say that, the visuals together with the music, create an entire space?
I think that was my idea, when I was working on it. But after seeing it in theater myself, I felt I wanted to take it further. The thing I didn’t like about it actually is that when different people listen to music, they have different ideas or their own fantasy that they think about and with this I am sort of dictating to people what they should think, and that felt a bit limiting to me. It was a great experiment, and I am happy with it as an experiment, but I am moving forward, curious to play with other ideas.

Did you compose this visual presentation the same way, that you are making your music?
In a way, but I think that when I am working on music I am trying to draw the source material from many different sources. I mean really anything that sounds good, an instrument or a sample of something. But with the film it was all things that I shot on super 8 mm film over 2 or 3 months. So that was a much smaller pool of information to draw from. I only shot 60 minutes of film, and the final film was like 52 minutes. I was trying to find a way to use everything, so it was like a puzzle, I like doing that with music too.

How or why did you start filming?
It was circumstantial. I was going to see a psychoanalyst in the city so I would take a taxi to the psychoanalyst’s office, a couple of times a week. I started seeing all these things on the way, and then I decided to start filming before and after the sessions. This is what is in front of me, what can I do with that? Which is also how I try to work with music. What sounds are being presented to me? Whether that means going into the record store and stumbling over something randomly or playing something by accident on an instrument, using these random things and trying to collage them into something that is more coherent, but not necessarily with a direct narrative in mind.

In the visual presentation feet, legs, and body parts seems to be a recurrent theme. Why are you showing parts and not the whole person?
In these shots I was focused on the composition of clothing chosen by the wearer. The way in which a billowing pant leg lay atop an orthopedic shoe, or the manner in which an extra long white tube sock was stuffed into a pair of nondescript Reeboks became fascinating to me after watching masses of people stream by.

How do you feel when you see the visual presentation now?
I feel the same way now as I did when I originally shot them. I think that people’s minds are completely incredible and unpredictable and that their clothing choices and behavior in public is an amazing way to witness these sorts of inner-workings.

A lot of different patterns, recognizable and not, floors, ceilings, etc. a bit like a puzzle, flashing on the screen, but no storyline. What would you like people to feel, when they see these visuals?
I never set out to force anyone into feeling a certain way or thinking a certain thing with any of the projects that I’m working on. I am only laying out my own thoughts and interests collaged together. I hope that everyone who interacts with the work will have completely different interpretations. This sort of ambiguity is much more interesting to me than a defined message or intention.

There are several cars depicted in the series as well. Were you in a car yourself
when you filmed?
I filmed the majority of the project from the backseat of various taxis in Manhattan. I really liked that what I was able to film in detail was dictated by the actions of these cars – if we were forced to stop in traffic or at a red light, if we were turning wildly around a crowd of people, etc. It feels nice to me that the outcome of the project was in large part left up to chance. 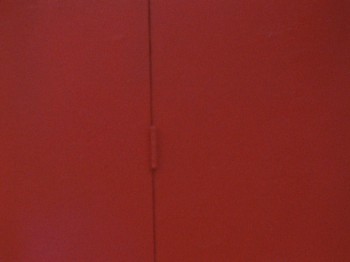 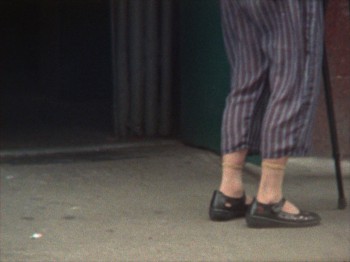 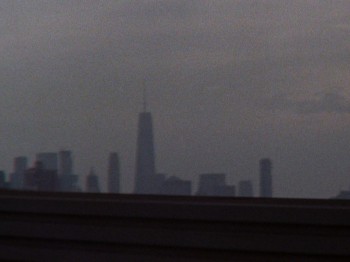 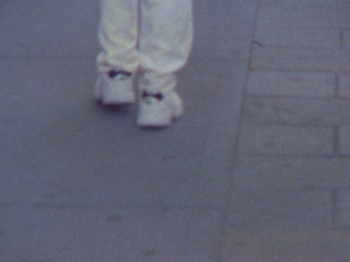 The pictures here shown are all stills from Odeon, making a collage, like on the cover of Plum. And the track you can listen to is “Glue” from Plum. If you have listened to the track before, maybe the pictures will give you new associations: there are no right and wrong thoughts, no limits to your imagination, just enjoy the track and stills together, or parts of it.

As a final teaser, John Roberts told me, that he is working on his next project that will both involve audio and visuals, but in a different way. He will push it further. He couldn’t tell more. But hey, we are excited!