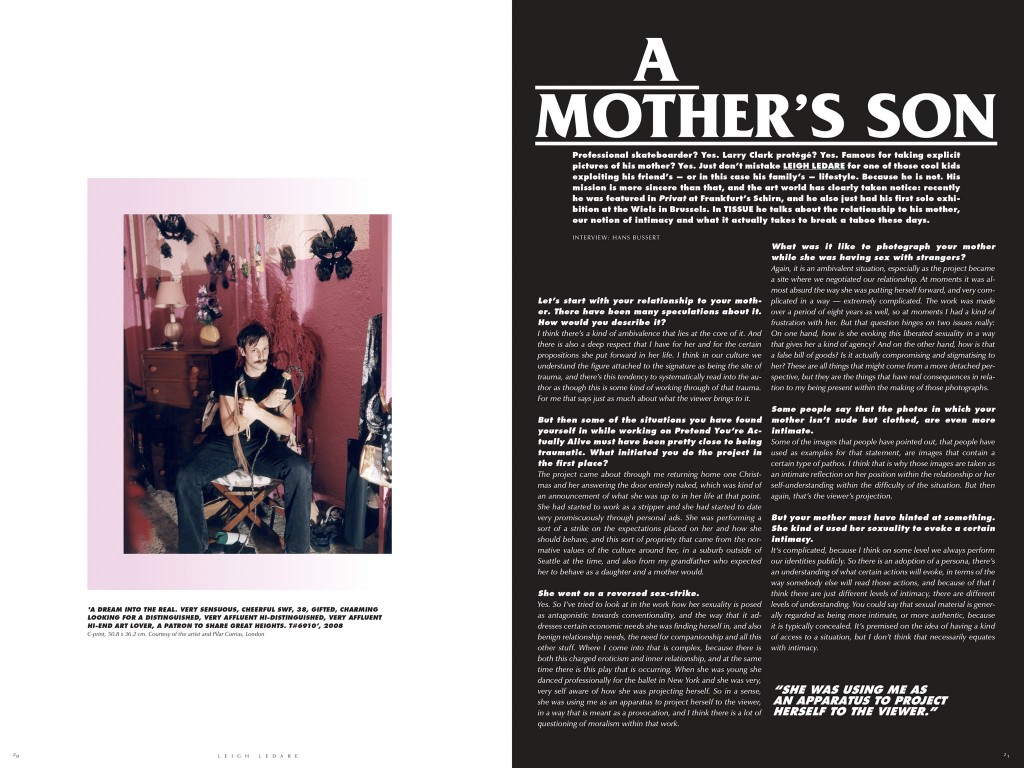 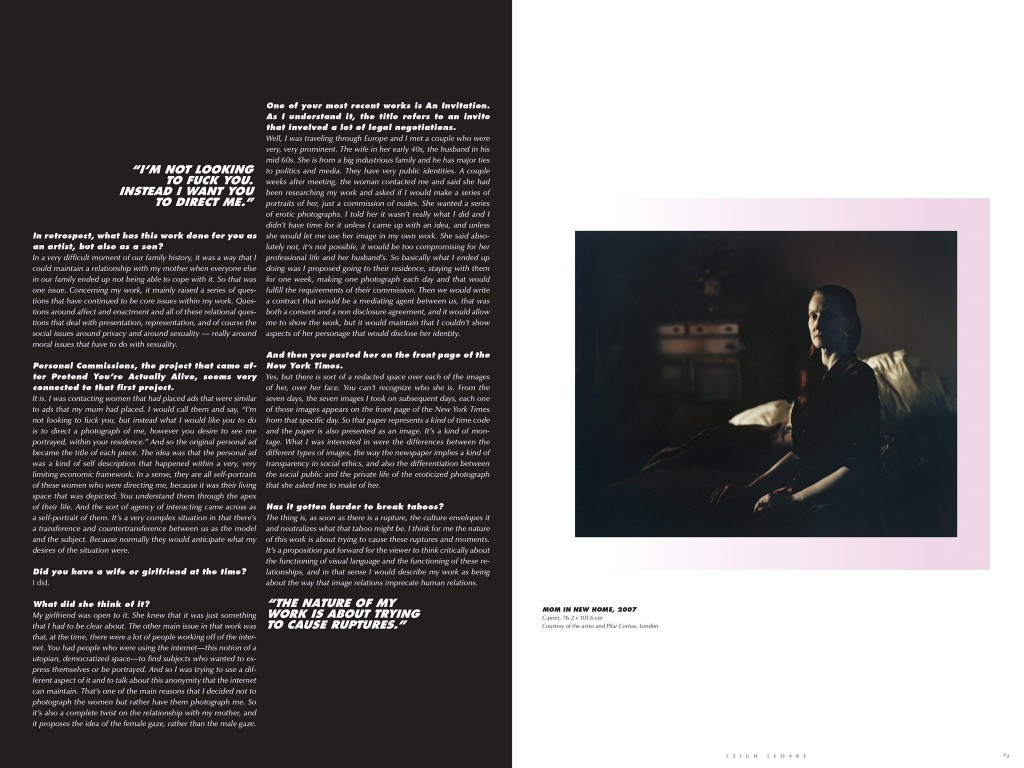 Professional skateboarder? Yes. Larry Clark protégé? Yes. Famous for taking explicit pictures of his mother? Yes. Just don’t mistake Leigh Ledare for one of those cool kids exploiting his friend’s — or in this case his family’s — lifestyle. Because he is not.His mission is more sincere than that, and the art world has clearly taken notice: recently he was featured in Privat at Frankfurt’s Schirn, and he also just had his first solo exhibition at the Wiels in Brussels. In TISSUE he talks about the relationship to his mother, our notion of intimacy and what it actually takes to break a taboo these days.

Interview with Leigh Ledare as published in TISSUE N°3 in February 2013:

Let’s start with your relationship to your mother. There have been many speculations about it. How would you describe it?
I think there’s a kind of ambivalence that lies at the core of it. And there is also a deep respect that I have for her and for the certain propositions she put forward in her life. I think in our culture we understand the figure attached to the signature as being the site of trauma, and there’s this tendency to systematically read into the author as though this is some kind of working through of that trauma. For me that says just as much about what the viewer brings to it.

But then some of the situations you have found yourself in while working on Pretend You‘re Actually Alive must have been pretty close to being traumatic. What initiated you do the project in the first place?
The project came about through me returning home one Christmas and her answering the door entirely naked, which was kind of an announcement of what she was up to in her life at that point. She had started to work as a stripper and she had started to date very promiscuously through personal ads. She was performing a sort of a strike on the expectations placed on her and how she should behave, and this sort of propriety that came from the normative values of the culture around her, in a suburb outside of Seattle at the time, and also from my grandfather who expected her to behave as a daughter and a mother would.

She went on a reversed sex-strike.
Yes. So I’ve tried to look at in the work how her sexuality is posed as antagonistic towards conventionality, and the way that it addresses certain economic needs she was finding herself in, and also benign relationship needs, the need for companionship and all this other stuff. Where I come into that is complex, because there is both this charged eroticism and inner relationship, and at the same time there is this play that is occurring. When she was young she danced professionally for the ballet in New York and she was very, very self aware of how she was projecting herself. So in a sense, she was using me as an apparatus to project herself to the viewer, in a way that is meant as a provocation, and I think there is a lot of questioning of moralism within that work.

What was it like to photograph your mother while she was having sex with strangers?
Again, it is an ambivalent situation, especially as the project became a site where we negotiated our relationship. At moments it was almost absurd the way she was putting herself forward, and very complicated in a way — extremely complicated. The work was made over a period of eight years as well, so at moments I had a kind of frustration with her. But that question hinges on two issues really: On one hand, how is she evoking this liberated sexuality in a way that gives her a kind of agency? And on the other hand, how is that a false bill of goods? Is it actually compromising and stigmatising to her? These are all things that might come from a more detached perspective, but they are the things that have real consequences in relation to my being present within the making of those photographs.

Some people say that the photos in which your mother isn’t nude but clothed, are even more intimate.
Some of the images that people have pointed out, that people have used as examples for that statement, are images that contain a certain type of pathos. I think that is why those images are taken as an intimate reflection on her position within the relationship or her self-understanding within the difficulty of the situation. But then again, that’s the viewer’s projection.

But your mother must have hinted at something. She kind of used her sexuality to evoke a certain intimacy.
It‘s complicated, because I think on some level we always perform our identities publicly. So there is an adoption of a persona, there’s an understanding of what certain actions will evoke, in terms of the way somebody else will read those actions, and because of that I think there are just different levels of intimacy, there are different levels of understanding. You could say that sexual material is generally regarded as being more intimate, or more authentic, because it is typically concealed. It’s premised on the idea of having a kind of access to a situation, but I don’t think that necessarily equates with intimacy.

In retrospect, what has this work done for you as an artist, but also as a son?
In a very difficult moment of our family history, it was a way that I could maintain a relationship with my mother when everyone else in our family ended up not being able to cope with it. So that was one issue. Concerning my work, it mainly raised a series of questions that have continued to be core issues within my work. Questions around affect and enactment and all of these relational questions that deal with presentation, representation, and of course the social issues around privacy and around sexuality — really around moral issues that have to do with sexuality.

Personal Commissions, the project that came after Pretend You’re Actually Alive, seems very connected to that first project.
It is. I was contacting women that had placed ads that were similar to ads that my mum had placed. I would call them and say, “I’m not looking to fuck you, but instead what I would like you to do is to direct a photograph of me, however you desire to see me portrayed, within your residence.” And so the original personal ad became the title of each piece. The idea was that the personal ad was a kind of self description that happened within a very, very limiting economic framework. In a sense, they are all self-portraits of these women who were directing me, because it was their living space that was depicted. You understand them through the apex of their life. And the sort of agency of interacting came across as a self-portrait of them. It’s a very complex situation in that there’s a transference and countertransference between us as the model and the subject. Because normally they would anticipate what my desires of the situation were.

Did you have a wife or girlfriend at the time?
I did.

What did she think of it?
My girlfriend was open to it. She knew that it was just something that I had to be clear about. The other main issue in that work was that, at the time, there were a lot of people working off of the internet. You had people who were using the internet—this notion of a utopian, democratized space—to find subjects who wanted to express themselves or be portrayed. And so I was trying to use a different aspect of it and to talk about this anonymity that the internet can maintain. That’s one of the main reasons that I decided not to photograph the women but rather have them photograph me. So it’s also a complete twist on the relationship with my mother, and it proposes the idea of the female gaze, rather than the male gaze.

One of your most recent works is An Invitation. As I understand it, the title refers to an invite that involved a lot of legal negotiations.
Well, I was traveling through Europe and I met a couple who were very, very prominent. The wife in her early 40s, the husband in his mid 60s. She is from a big industrious family and he has major ties to politics and media. They have very public identities. A couple weeks after meeting, the woman contacted me and said she had been researching my work and asked if I would make a series of portraits of her, just a commission of nudes. She wanted a series of erotic photographs. I told her it wasn’t really what I did and I didn’t have time for it unless I came up with an idea, and unless she would let me use her image in my own work. She said absolutely not, it‘s not possible, it would be too compromising for her professional life and her husband’s. So basically what I ended up doing was I proposed going to their residence, staying with them for one week, making one photograph each day and that would fulfill the requirements of their commission. Then we would write a contract that would be a mediating agent between us, that was both a consent and a non disclosure agreement, and it would allow me to show the work, but it would maintain that I couldn’t show aspects of her personage that would disclose her identity.

And then you pasted her on the front page of the New York Times.
Yes, but there is sort of a redacted space over each of the images of her, over her face. You can’t recognize who she is. From the seven days, the seven images I took on subsequent days, each one of those images appears on the front page of the New York Times from that specific day. So that paper represents a kind of time code and the paper is also presented as an image. It’s a kind of montage. What I was interested in were the differences between the different types of images, the way the newspaper implies a kind of transparency in social ethics, and also the differentiation between the social public and the private life of the eroticized photograph that she asked me to make of her.

Has it gotten harder to break taboos?
The thing is, as soon as there is a rupture, the culture envelopes it and neutralizes what that taboo might be. I think for me the nature of this work is about trying to cause these ruptures and moments. It’s a proposition put forward for the viewer to think critically about the functioning of visual language and the functioning of these relationships, and in that sense I would describe my work as being about the way that image relations imprecate human relations.