He was nervous, he felt like a new student standing in front of a new class. Now he was sitting there, surrounded by painters, copywriters, photographers, graphic and fashion designers. On this evening, the creatives wanted to hear from him, how it was back then when he worked as an editor and what he thought about print in the future. He didn’t really understand their interest in the past. He asked himself why they were all so mesmerized by the past. And he had never really thought about the future. He didn’t even know what was going to happen in the next weeks. And it puzzled him even more that he had been chosen. He, who likes to dawdle, and is always looking for new detours, should now offer his expert opinion. 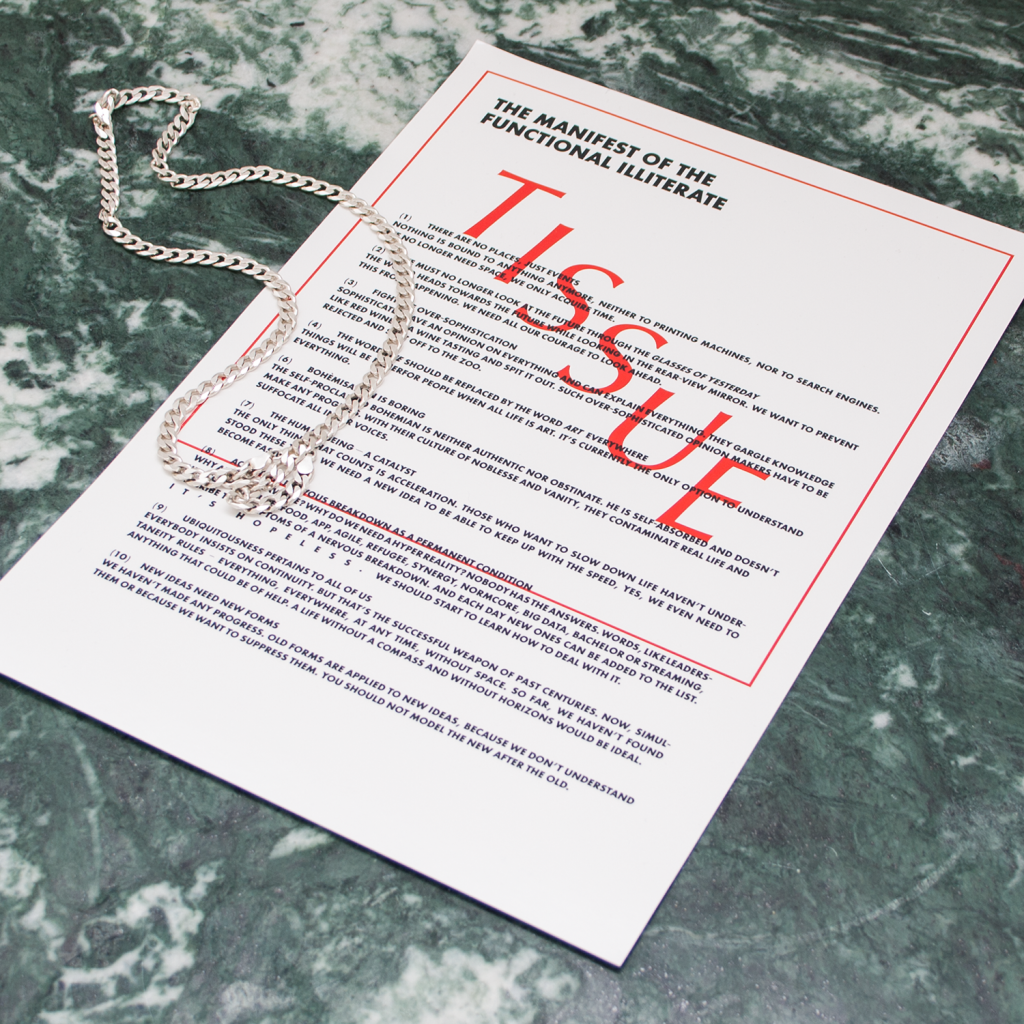 Well and then besides his uncertainty, he also started to feel like a prehistoric discovery that was still alive. A Neanderthal man that you could touch.

But what would he do today? He didn’t have a clue. He thought about it for a moment and then decided to read out a manifest. A manifest seemed like a good starting point for a collective and on this evening he couldn’t think of anything better.

He began reading out the Manifest of the Functional Illiterate.

(1) There are no places, just events
Nothing is bound to anything anymore, neither to printing machines, nor to search engines. We no longer need space, we only acquire time.

(2) We must no longer look at the future through the glasses of yesterday
The world heads towards the future while looking in the rear-view mirror. We want to prevent this from happening. We need all our courage to look ahead.

(3) Fight the over-sophistication
Sophisticates have an opinion on everything and can explain everything. They gargle knowledge like red wine at a wine tasting and spit it out. Such over-sophisticated opinion makers have to be rejected and sent off to the zoo.

(4) The word life should be replaced by the word art everywhere
Things will be easierfor people when all life is art. It’s currently the only option to understand everything.

(6) Bohèmisation is boring
The self-proclaimed bohemian is neither authentic nor obstinate. He is self-absorbed and doesn’t make any progress. With their culture of noblesse and vanity, they contaminate real life and suffocate all inner voices.

(7) The human being — a catalyst
The only thing that counts is acceleration. Those who want to slow down life haven’t understood these times. We need a new idea to be able to keep up with the speed, yes, we even need to become faster.

(8) Accept the nervous breakdown as a permanent condition
Why are we all awake? Why do we need a hyper reality? Nobody has the answers. Words, like leadership, content, superfood, app, agile, refugee, synergy, normcore, big data, bachelor or streaming, describe the symptoms of a nervous breakdown. And each day new ones can be added to the list. I t ’ s h o p e l e s s . We should start to learn how to deal with it.

(9) Ubiquitousness pertains to all of us
Everybody insists on continuity. But that’s the successful weapon of past centuries. Now, simultaneity rules – everything, everywhere, at any time, without space. So far, we haven’t found anything that could be of help. A life without a compass and without horizons would be ideal.

(10) New ideas need new forms
We haven’t made any progress. Old forms are applied to new ideas, because we don’t understand them or because we want to suppress them. You should not model the new after the old.