For a lot people, the author of this story included, Christoph Schlingensief is an iconoclast and a genius. Starting out as an experimental filmmaker, he expanded his work into the field of performative arts in the early ’00s. Heavily influenced by Joseph Beuys’ social sculptures he began using video footage to capture a certain image of the social. Despite of Schlingensief’s early death in 2010, Luca Ganz can feel his revolutionary spirit reverberating throughout the German art world. So, ten years after his death: what makes firestarting Christoph Schlingensief so relevant to this day? 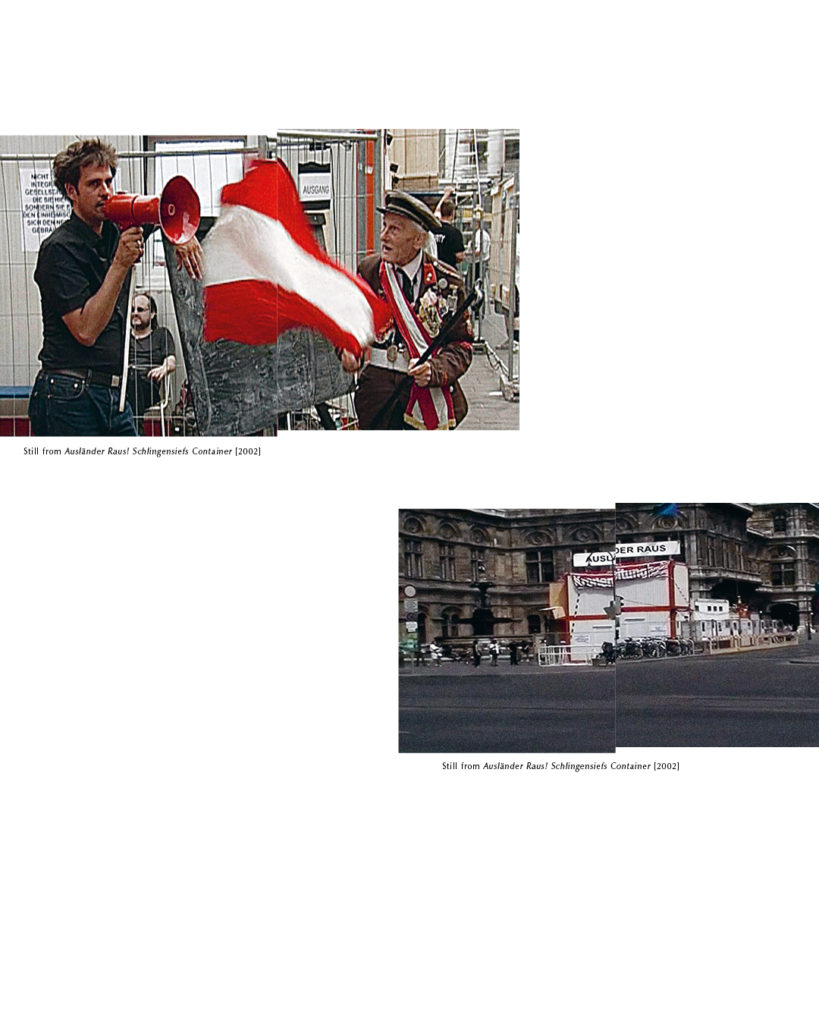 Christoph Schlingensief suddenly appeared in Vienna. He was invited to show one of his works at the Wiener Festwochen. This was after his attempt at founding a political party ended in 180,000 DM (approx. 90,000 Euro) of tax liabilities for him, and after he toured the country in search of a Germany for the next century. The end of this Deutschlandsuche was the throwing of 99 pieces of German memorabilia into the Hudson River in New York, to mark the beginning of a new globalised century.

Schlingensief — who one often found citing Joseph Beuys: ‘This societal system will be completely destroyed in seven years.’ — was eager to be as prophetic as his predecessor, showing us the reality of social construction.

His way of achieving this was to get rid of any positive political position. In his work Bitte Liebt Österreich!, Schlingensief reacted to the rise of the FPÖ, a right-wing populist party, that went on to form the Austrian federal government led by the centre-right ÖVP in 1999. The same coalition was set up in 2017, ending famously in 2019 with the so-called ‘Ibiza affair’ involving FPÖ chairman H. C. Strache.

The party rallied with a racist campaign and Schlingensief was convinced that it was only possible to undermine this political trend, by letting the right-wing phantasm of relentless deportation come true.

‘That’s when I thought: you have to turn the politicians’s propaganda into reality. That is, you have to publicly set up a film studio and claim that this is actually happening.‘

The script goes as follows: set up a Big Brother-style container on one of Vienna’s most visited squares and let twelve refugees waiting for their residency status to be cleared live inside it for six days. Then broadcast the events via live stream on a webpage, where viewers are able to decide which of the twelve people should be deported, and who should get residency status through a set-up marriage with a volunteer. A right-wing dream linked together with the popular TV narrative of social elimination.

The container was crowned by a banner proclaiming in big letters: ‘Ausländer raus!‘ [Foreingers out!], and the outside was plastered with headlines from the Kronen Zeitung, the prime organ of Austria’s print media monopoly, which supported the right-wing narrative of criminal foreigners raiding the country.

It worked: the FPÖ and ÖVP were outraged by the supposed damage to Austria’s image, a damage that was in fact caused by their own political campaign. Kronen Zeitung even called Schlingensief a terrorist. You could find Viennese citizens fiercely discussing the work around the clock, culminating in some of them trying to invade the set and bring down the ‘Ausländer raus!‘ banner.

On the fifth day of the Wiener Festwochen, a left-wing group occupied the set. They spray-painted the banner and tried to free the refugees inside the container. This was done out of sympathy with Schlingensief, as the activists saw it as the only humane reaction to such a setting —
especially because Schlingensief was constantly provoking the government with comments like:

‘Your government has been allowing a sign with the inscription “Foreigners out” to hang here in the middle of Vienna for days. What kind of country is this? What kind of unbelievable government do you have here? Why don’t they come and tear the thing down?‘

But Schlingensief didn’t want the left-wing activists to have the last word: ‘I had little sympathy for these activists […], even though some of them were genuinely kind. […] They became a washing machine for their filthy, filthy heads of state because they involuntarily did for them, what they didn’t want to do for themself.‘

‘Resistance is over — you have to create contradictions.‘

So the stunt continued the next and last day, as the banner was restored and the refugees were brought back from a hotel were they had stayed overnight. 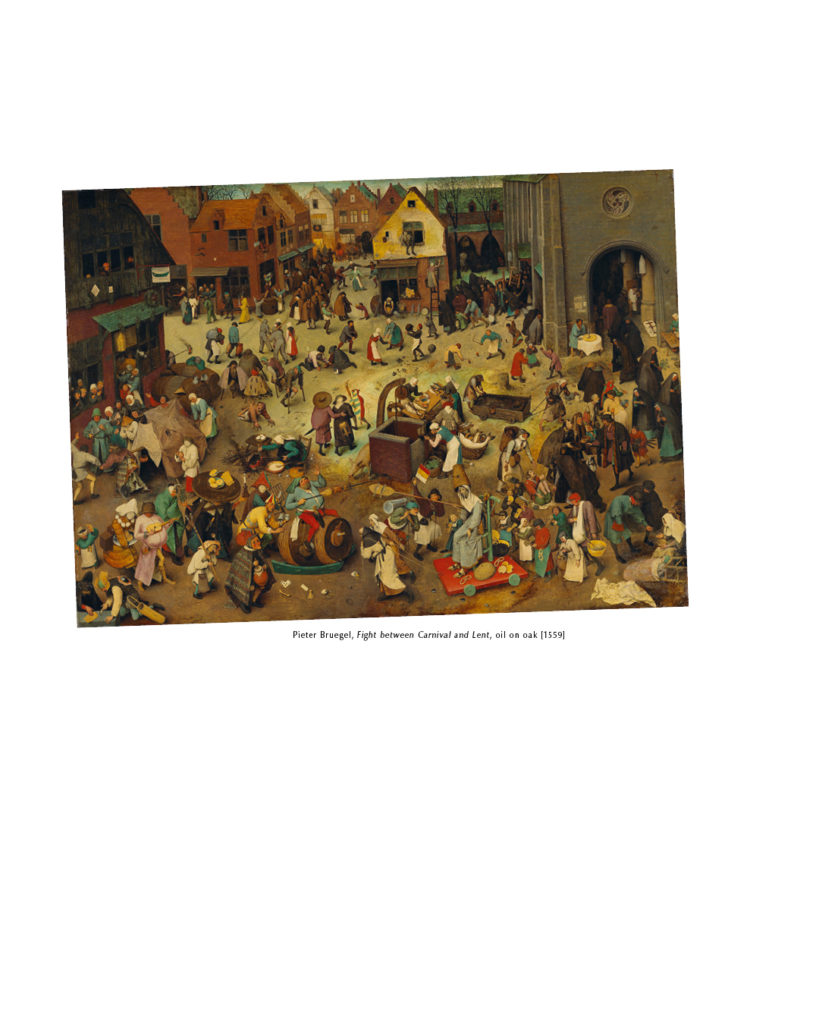 For Christoph Schlingensief, it was more important to let the image unfold its full potential. The seeming resolution of freeing the refugees would only conceal the painful reality behind any symbolic political action. He felt he had to preserve the excessiveness of the public escalation caused by the staging, as a way of highlighting the actual political conditions.

When asked about his intentions and if he wanted to provoke political change, Schlingensief answered in a 2002 documentary about Bitte Liebt Österreich!: ‘This madness […] doesn’t interest me at all, I’m only really interested in asking different systems to dance together in this picture. That is what really makes the picture. And the picture was there, for seven days […] and will still be there after 10 years and even in 100 years […]. But whether it has changed the world or individual people is not relevant at all, because those who make that accusation are definitely not willing to change the world anyway.‘

By neglecting any positive political position, Schlingensief was able to stage what one might call a historical painting of the early ’00s, caught on film by his camera crew as well as the public media.

With the above quote in mind, one might also recall the chaotic happenings depicted in Bruegel’s painting The Fight Between Carnival and Lent, where different social poles — the pub, the church, and the market —
reveal their influence by making the people in the scene dance in a roundelay around the town square, creating a powerful energetic field that draws everyone in. Schlingensief might as well be the jester carrying a torch in the scene, right at the centre of the painting. 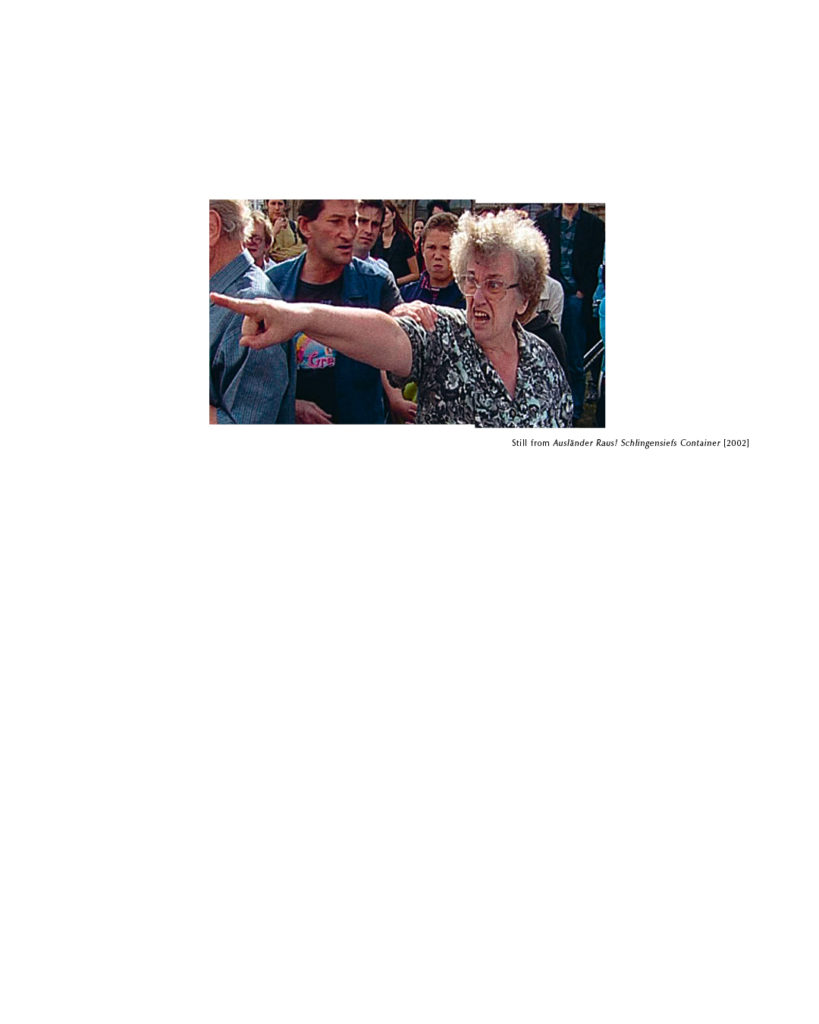 PANIC IN THE EDITING ROOM

That Schlingensief would use a Big Brother-style container as the stage for his piece is especially interesting because of the container’s apparent oscillation between fiction and reality. A simple container thus came to stand for an ambiguity that confronts the viewer with the maelstrom of political power, in which the subject has to relinquish any knowledge of right or wrong, because they are confronted with pure energy deprived of any meaning. This is precisely the position, Schlingensief found himself in. By setting up these forces, he dragged other participants — the press, the political parties, the Viennese public, the commentators — into the image, where they willingly played their part.

In his autobiography, Schlingensief states: ‘Such intersections between reality and fiction, between life and art, are something I have probably touched on quite often, not just during that week in Vienna. I thought I was in reality, but I had to recognise that no-one around me took the situation as seriously as I did. Or I myself didn’t take the situation seriously and suddenly realised how serious and bitter it was. I have often experienced similar muments of tipping over the edge. Maybe too often. Because what I had instigated there was not only unclear and contradictory to other people. I, too, often didn’t know what was going on, which side of the line I was on. And deep inside, in muments when I was looking for clarity, I was unhappy about the total confusion I was causing. Because I lost myself in the process, because I frequently ended up in total confusion myself.‘

The price of the total image is the loss of one’s own consistency. But what made Christoph Schlingensief so successful as an artist, was his willingness to let his sanity and integrity pain him. 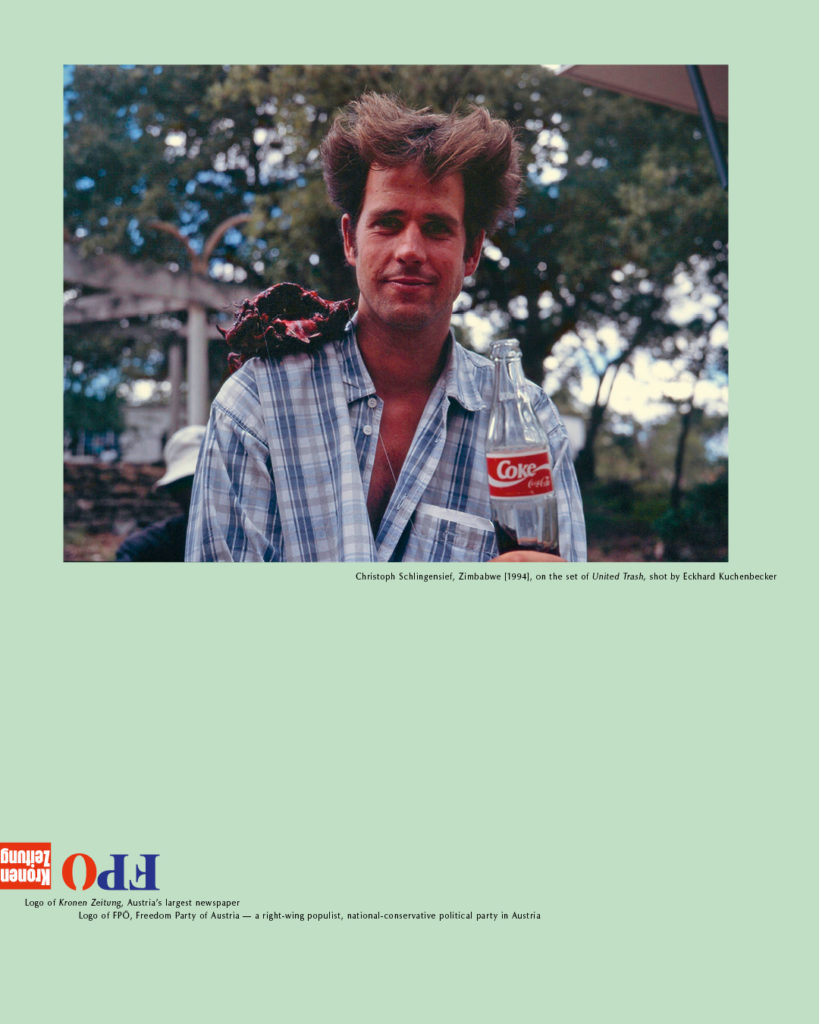 Catch 1 of 666 copies of TISSUE N°666FFF for a full print experience: https://store.tissuemagazine.com/product/tissue-magazine-666fff