BY STEPHAN GRÄFE
When I was 16, I raised my right arm in public. Sudden, rigid and in an angle of 45 degrees to my sight: the Hitler salute! I fell in love after hearing Der Mussolini for the first time after a punk concert in my local youth centre. It appeared to me as if this was everything that had been banned from the punk culture (what a non-word) that I tried to be a part of. Since it had started becoming weirdly serious since the start of the millennium, Der Mussolini offered dance music, references from techno or EBM and the lyrics were crystalline commands! Soaked in sweat, I stamped over the sticky wooden floor, danced the Mussolini (marched back and forth through the dance hall), the Jesus Christ (crucified myself) and yes, when I danced the Adolf Hitler, I raised my right arm into the air just like Gabi Delgado had done before me. I need hardly say that the fun was over for everyone and I was immediately kicked out while tirades of insults rained upon me. On this day I realised two things: firstly and mostly, punks are only the negative reflections of their hated parents and secondly, I had to find out who that band was. 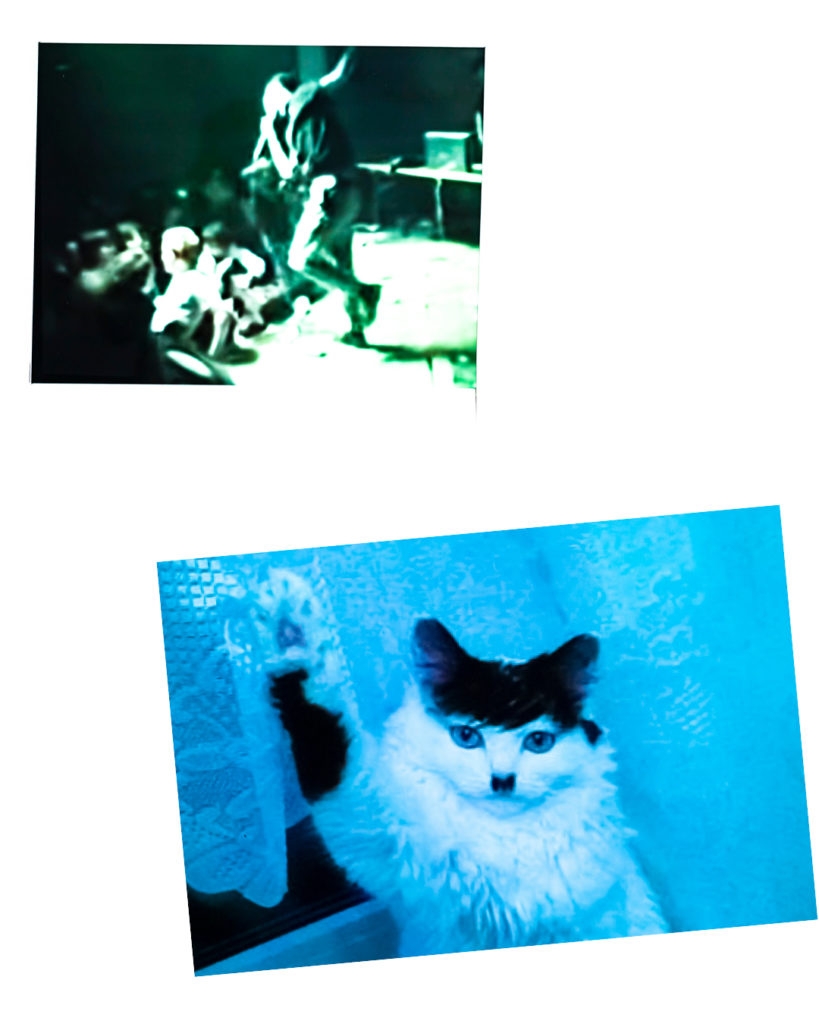 Nothing is more radical than playing. The game constantly combines the seriousness of every day life and the unregulated possibilities of one’s imagination. The more attention one pays to such processes, the more irritating it appears that children use toy guns or the virtual simulation of a video game to gleefully shoot each other. On one hand, the game is a chance to try out a specific role, on the other, the acceptance of the concept of taking such roles (e.g. being the murderer) does something with the social perception of that term in its content — it disempowers it, makes it easier to discuss and more changeable and it therefore polarises, too.

DAF were incomparable in playing these kind of games and they used it to put their fingers onto any weak spot of the moral discourse which society tried to hide by the cultivation of memorials and concealing: like dictatorships, war crimes, homosexuality, the politics of the German Federal Republic and the German Democratic Republic. 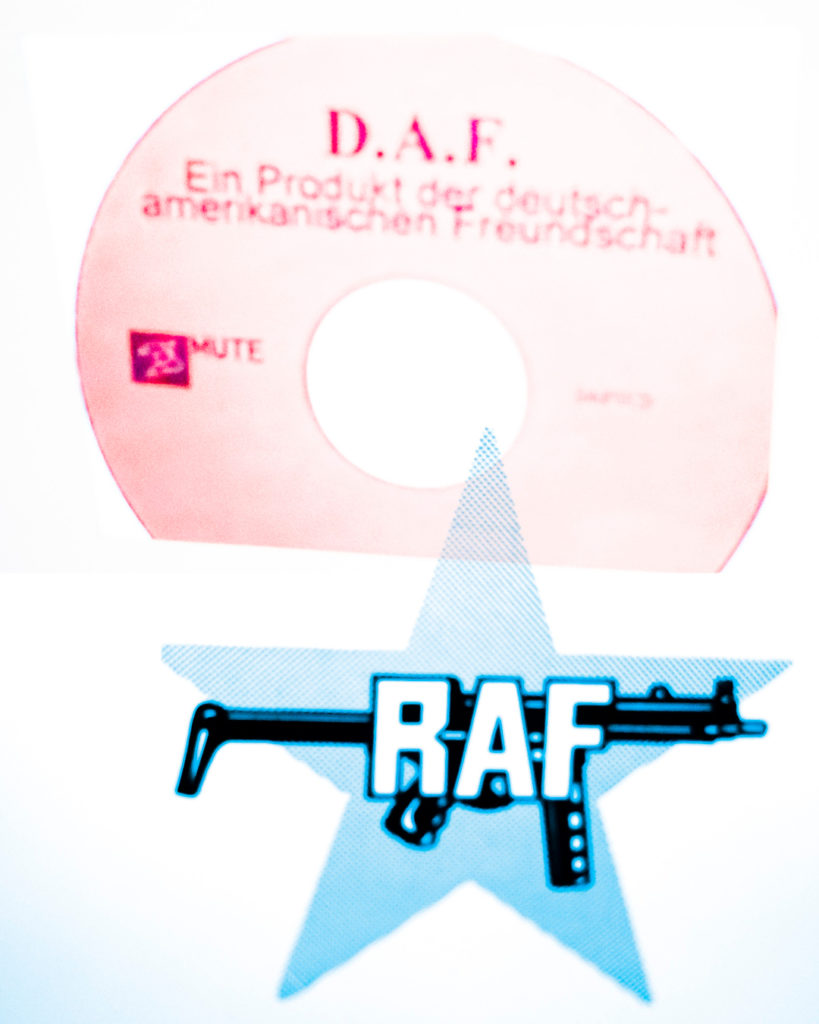 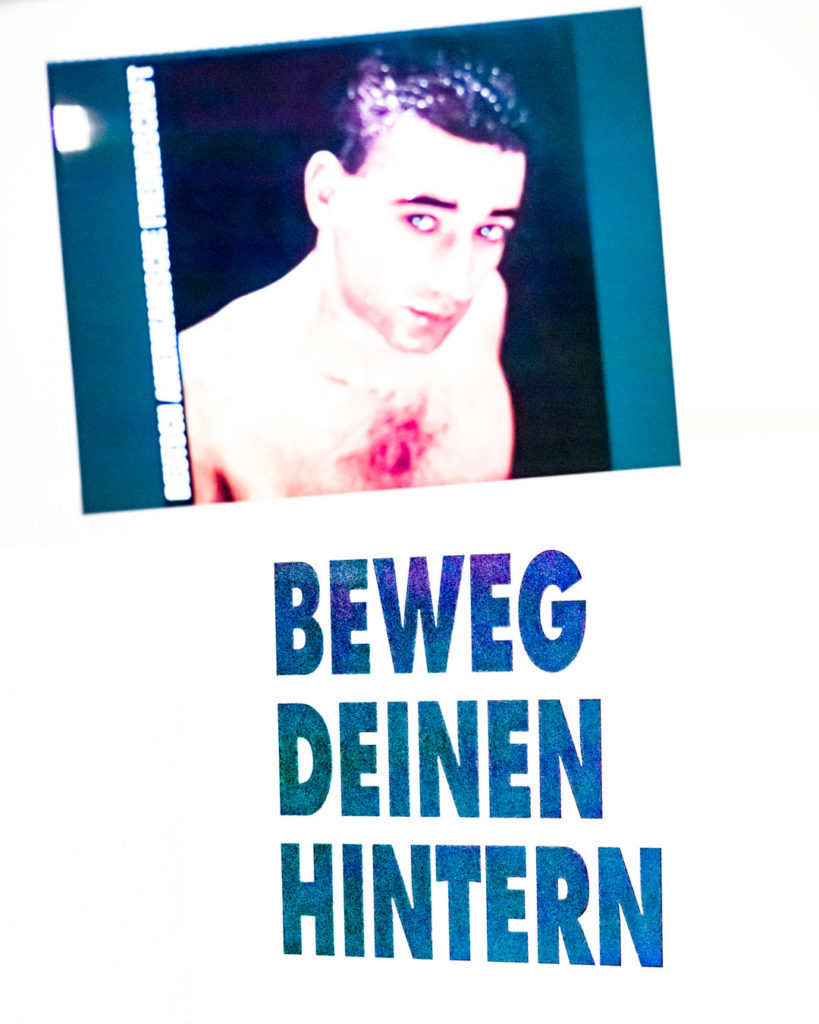 The game had started already with the name. It was a merger of the [East] German-Soviet friendship (orig. Deutsch-Sowjetische Freundschaft) with reference to the striking initials of the West German terror organisation RAF and it concluded in the total call to unprecedented hedonism. As soon as a social condition hardened, they broke it down, moved on and rejected pre-existing ideas. When they started out in the punk scene of Düsseldorf, the two founders of DAF, Gabi Delgado-López and Robert Görl, absorbed everything new (the pace, the rebellion, the concept of DIY) and left behind what still seemed old-fashioned in this counterculture (any instruments connected to rock music). Music that had no tradition! Far away from American patterns such as rock and punk and far away from German pop lyrics. They decided to use electronic sequences. In contrast to Kraftwerk, who were human bodies in the shadows of their machine aesthetic, DAF were human-machine hybrids driven to excess by the rhythm of their drums and dance. To provoke, they charged their physicality with homoeroticism. On the front of their record cover of Alles ist gut (Eng. Everything is fine), there is Delgado: intensely illuminated in front of a black background. Beads of sweat glisten on his nude torso, and he gazes at the viewer from below. On the back side of the record, there is Görl depicted in a similar manner: topless, sweating and his short parted hair forms wet strands on his forehead while his mouth remains slightly open. These photographs are an announcement of a transgression that becomes true as soon as the record starts playing. When Delgado commands to ‘move your butt’ (orig. ‘Beweg deinen Hintern’) he only names what music has always done when it turned motionless music recipients into dancers and talks about the dictatorial power of driving rhythms and sounds over a body. In contrast to their rejection of tradition, the lyrics on their record deal with physicality and sex just like a majority of disco music: 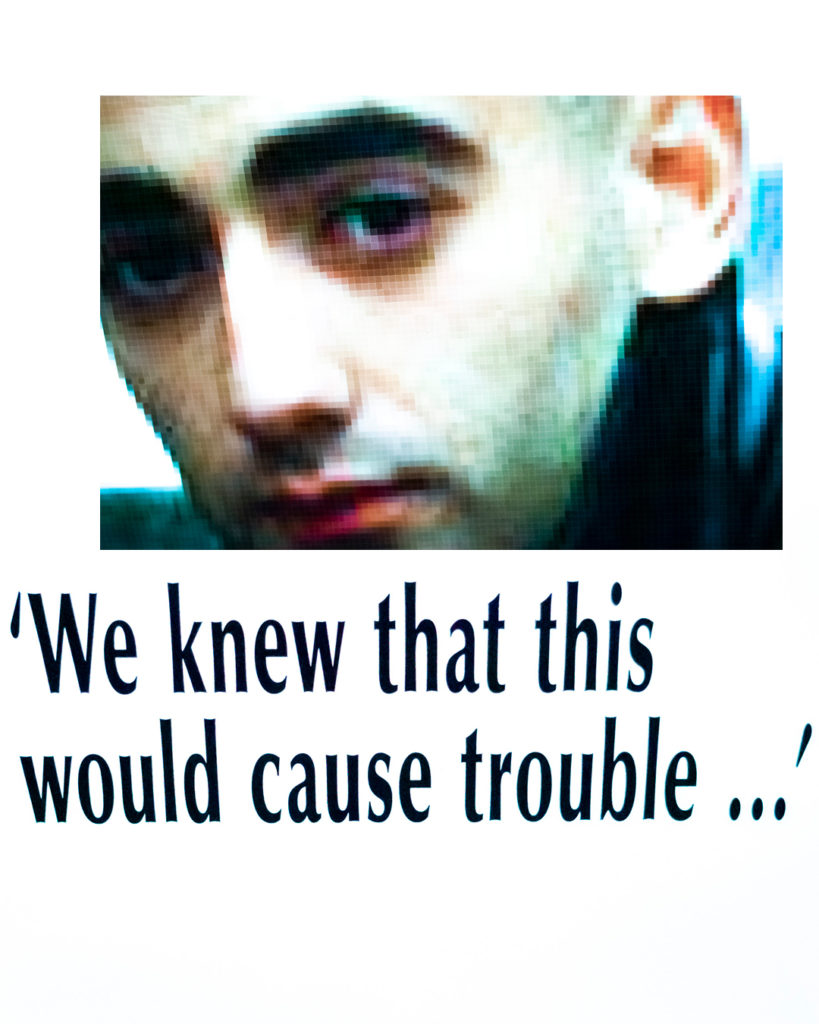 But they never intended their provocative lyrics to be political. ‘We knew that this would cause trouble,’ said Delgado once about the Mussolini recordings. ‘We liked that. It was a calculated provocation but never a political message.’ DAF always used to be a concept that followed strict rules and one of them was ‘There is no political positioning within the work’. Of course there are contrary statements, but ambivalence was obviously a consistent factor of the game they played and it was just as consistent as Delgado addressing his audience as boys and girls for decades. Their work remains open for projection and for all movements, but only theoretically. Because besides their brilliant move to relocate to London (when other bands refused to go commercial) to sign a deal with a major label, to then oversaturate the market by releasing three records in the span of one and a half years, and to then split right after releasing the last one of those, 1982’s Für immer, one felt as if rigor mortis had set in even when they got back together in 2003. Their new album presented fifteen new DAF songs that still had the same energy at the core, but content-wise and formally, it served a very generic consensus. The lyrics were not affronting anymore and when watching closely one could see the crumbling rust in the joints of their poses — their provocation had become powerless. Disclaiming their song Der Sheriff to be anti-American might serve as a good example:

At this point it becomes uncomfortably clear, as anti-Americanism had become fashionable ever since George W. Bush took over the oval office. Der Sheriff undermines DAF’s potential as it preaches to a choir that has long been there before their reunion.

Before that, Delgado and Görl were involved in the young techno and house scene that they tried to leave behind as it had become a burned out movement fueled by escapism and consumption. It could have been a break, a breach from what was before but they failed to succeed in this undertaking and it still remains to be done. One would have hoped for it, especially from such a charismatic duo like they were: a jazz drummer that had converted to buddhism and spends his time producing electronic music and a lyricist that invests his time in video game culture, computer modding and the entire works of Gilles Deleuze. One could accuse them of not living up to their potential but in the end that would only be a testimony of one’s hurt feelings or of weirdly perfectionist demands imposed on artists. 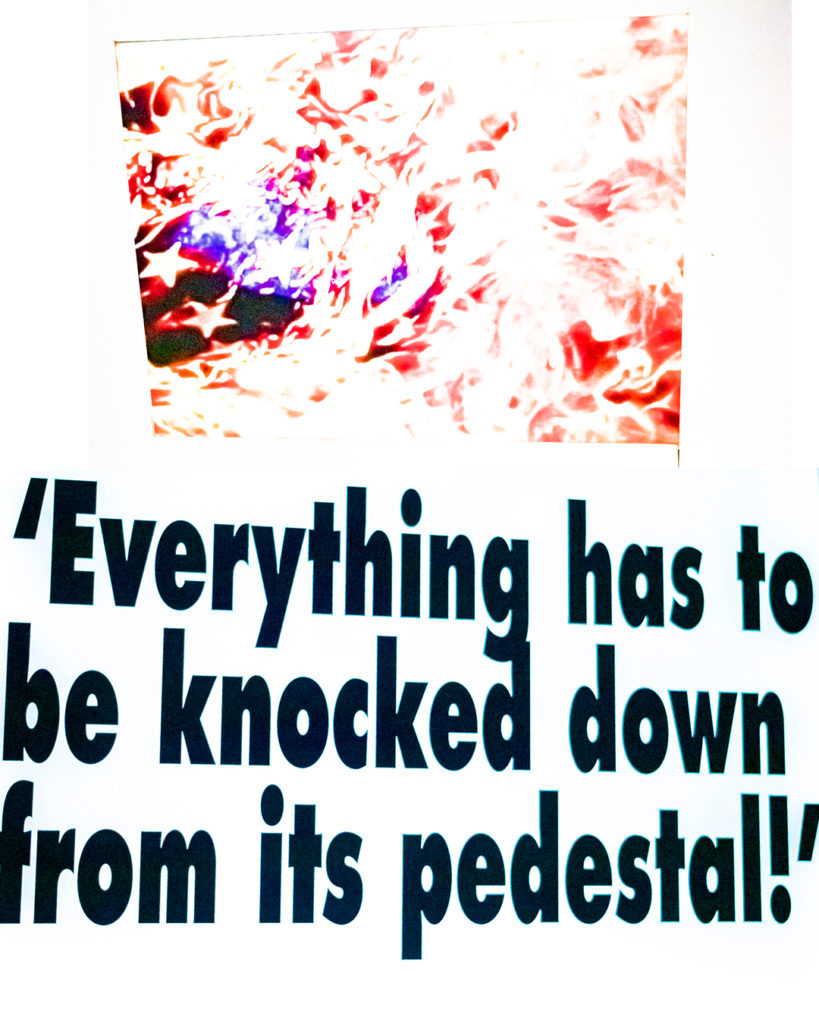 Ever since the act of playing Kebabträume, Verschwende deine Jugend or Der Mussolini has triggered nostalgic feelings of a blissful youth in which rebellion felt new and authentic, the radical potential of DAF had become exhausted. Even this text begins with a similar declaration of death that means nothing more than DAF ticked off, over, has been — but in a beautiful manner. And that is not bad at all, actually this — again — is the essence of the game that becomes even clearer in the form of an encouragement that they share with art slop, Hitler salute ally and DAF fan Jonathan Meese — it has to be repeated at all times: ‘Everything has to be knocked down from its pedestal!’

DAF showed an attitude that demands consequence. From a situated historicity into the current state of things. For the total game! No to culture of displays and cabinets, no to the loss of vitality and a never changing reproduction! The canonized into the canons! Fire! 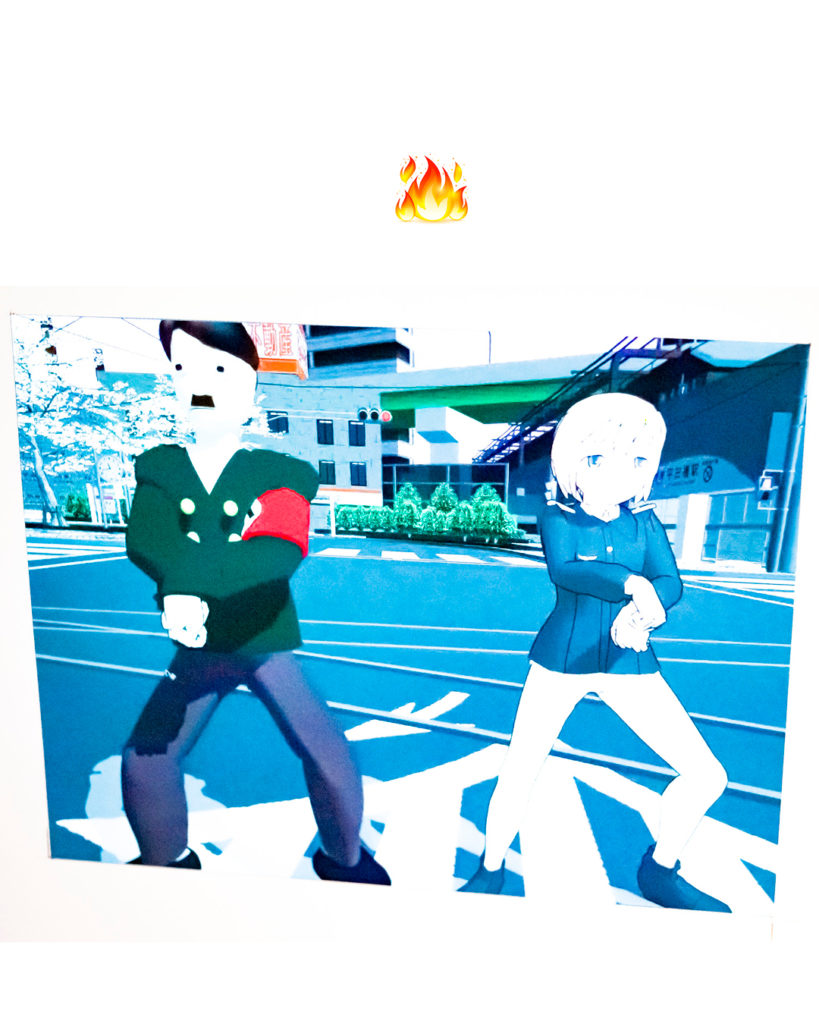