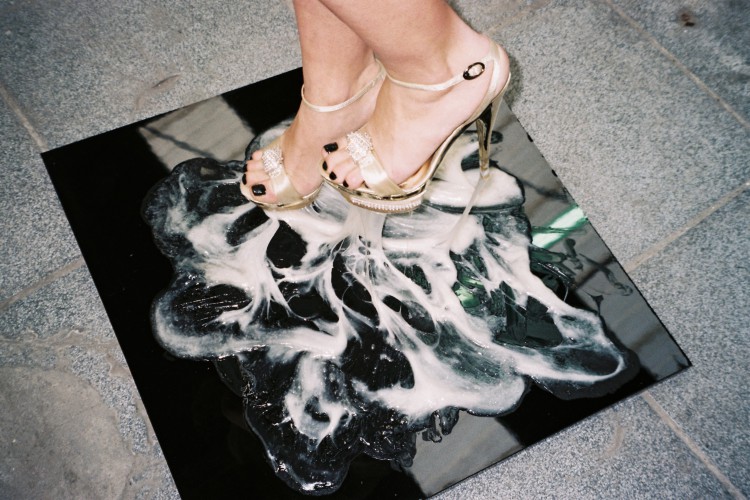 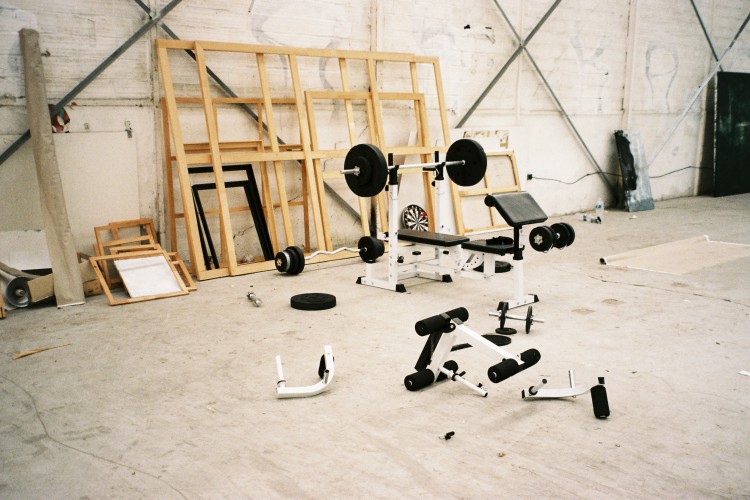 The pair talk to TISSUE about their inspirations and intentions for the piece, explaining how conforming to the system is inherently wrong and that life as we know it holds no future.

LB: Hi François! I’ve finally recovered from our last party, so let’s talk about our first collaboration. So… I asked you to make a video clip for my solo project Jardin as this year, Le Turc Mécanique decided to re-press A Girl With A Dog in a Rave (self-released on Dumbhill in 2014) on vinyl with the track Drop the Bass that I had already released on the tape label Simple Music Experience.
We only had 6 weeks to do something without any money so we worked on Drop the Bass with Anna Espona for the web development and Tiphaine Larrosa as a production assistant and we finally released the webpage dropthebass.lenybernay.com mid-January 2016.
First of all can you describe and link here the first inspiration video you sent me and tell me what you like about it? What excites you about it?

FQ: Well, I sent you this video: https://www.youtube.com/watch?v=wiYoF2MAH8A, where a guy rips his jeans off with a knife and his hands whilst touching his dick. I’m just in love with Youtube and the fact that he can publish his fantasy, his obsession and his own fetishes so easily. It’s like a big open book of secrets for everybody to see! I’m always looking for weird videos, and I usually randomly come across these ones. I’m not so much excited by it, I was more shocked in a good way. I found it strange and totally awesome. I’m more obsessed by human obsession. This video was my first inspiration. What did you feel the first time you saw that video?

LB: I was surprised that you could associate this video to the music, but I liked it because it is so sexual and so accessible on Youtube. It’s sexual because of the sound, the gesture, the anonymous guy, the symbolic knife…that’s also why i wanted to keep the sound of the jeans ripping. I also thought it was a viral advertisement for G-Star! To me a music video can’t just be a “communication” or a “promotional” support. My music is not created as a consumable product and it would be insane to apply old fashioned strategies to it. That’s why I told you that the format could be anything you want, with or without the entire track. I needed to work with someone exterior to the project and the idea was definitely to make a piece of art and not an advertisement.

FQ: Too many music videos, fashion editorials and graphic designs are commercial and look the same, so the way in which you think is interesting to me as I share the same point of view. You told me that this song is about people on the dance floor (dick face) who are there but not totally there, who are not attached by the sound and who are clearly waiting for one thing: the bass. You chose never to drop the bass and to include this little mocking voice. Would you say the dance floor is a metaphor for real life (IRL)? And can you explain to me how you applied this creative process to the conception of a song?

LB: Of course the dance floor is a part of life. You can find the same low level thinking and sensitivity everywhere. There are many ways to make a track but that lyric was actually found by my friend Pierre Human while we were shooting a video by l’Armée Des Morts. I asked him if I could use it as I planned to make a bass hit. But it’s not what happened! I was too smooth and sweet to make a hardcore hit that night. This track is a one shot, I only have a stereo recording, I didn’t edit it. I often work like this…I let the flow come and improvise as I do in Life. When you sent me the C-ORE inspiration it made me think of some works from Logo Magazine and a web-publication I did with Christelle Bonnet for the group show I curated Wakanda Afterlife (www.wakanda-afterlife.com) so I definitely enjoyed it. How did the idea of a webpage come to you? What do you like about that form? What’s your position on “quotation” and “inspiration” in your work, especially in our hyper-connected life?

FQ: The website was something I wanted to explore because it enabled me to have a blank page, and it ended up working well with our project. It was interesting to create this kind of world with these 3 videos of obsession that we found on Youtube, the lovely font and with the clickable cursor. Everything has it’s particular significance and everything was intertwined. The internet is a source of limitless influences and inspirations but we can quickly get lost in the constant flow of content so it was time for me to disconnect a little bit. Inspiration is more powerful in real life, conversations are real.

FQ: I remember the first time I saw you, it was during a party called Le monde est acid (The world is acid) at Saint Ex in Bordeaux, it was so cool. I don’t remember if I connected your amazing project “FRAG CHANNEL” with yourself at the time. I think that we talked and then I checked you on Facebook and then I connected it all. I even think that we had the same “LOL” haircut.
Anyway I had this crush on your musical work as well as your work as an artist even if the both are linked, thats undeniable! I’m not a DJ I just like iTunes, music and parties but your song Baby is very cool to play. It’s very difficult for me to talk about my work, but I can tell you my philosophy – “this is not about me, it’s about us.” My position lies in individual human identity: I don’t judge, I mean I don’t choose to say if it’s good or not. I just want everybody to feel free to be whatever they want and particularly for nobody to bother them. Laul.

FQ: Your description of the project is a good one, for me it is THE answer to the terrorist attacks. The video was shot with lots of cold and insecure looks from people to Simon. It was so cool to shoot that. The first two fetish videos were shot in a big artist warehouse, early in the morning. It started with the ripping of the jeans by Jardin, with 3 different cameras. Finally we made the decision to shoot in PhotoBooth because of the low frame rate and crappy quality, which closely referenced the video. It’s intense to film that. And you, how did you perceive this performance? The glue shot was also an improvisation because we didn’t know if the glue was gonna stick to the shoes, it was a one shot! Summer Satana performed by smothering her feet into the glue. The chemical glue was a very particular choice as it is so strong. I think that Summer Satana wants to do that again but with a different material. I believe in the future and I think that one day we’ll have big budget for our project LOL. Do you believe in the future?

LB: I was a bit scared to do that action because sometimes I don’t feel myself as so sensual; whilst our inspiration in a sense is quite sensual and hot. I was also excited and even more when we shot Summer, because she was realizing a fantasy, she showed me those videos of glue fetishists several times.

About the future…Human life is a fucking mess. World Brain, Terror vs. Security, Capitalism…our systems are sick, violent and fascinating. I can answer with an important statement to me: With no future everything is possible.

In turning four cold shoulders to the clasps of rule, regulation and conformity, the duo address a new era of modern connectivity via The World Wide Web.

By upholding likeminded ideals toward creativity within their own fields, Drop The Bass conjoins both mentalities thus birthing the collective mantra: Fuck the system, be original, don’t be a dickface. 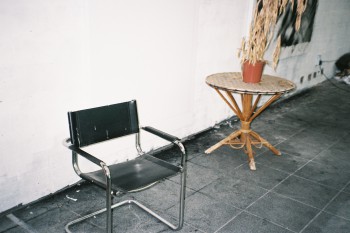 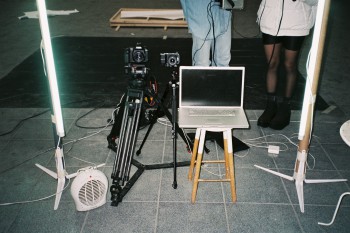 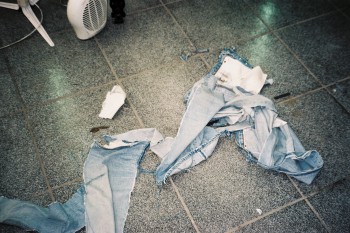 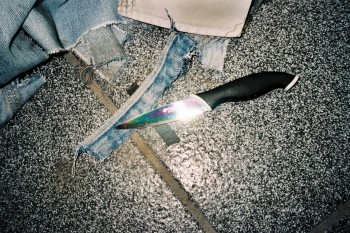 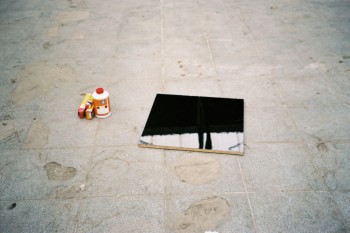 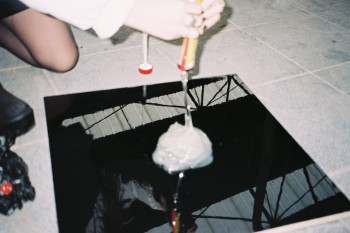 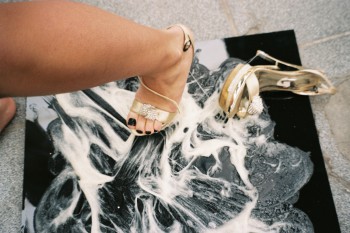