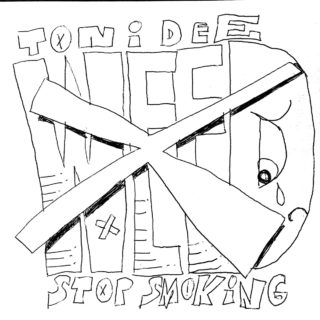 CONFESSIONS OF A HEAVY REEFER
Bon Giorno, it’s Tuesday morning. I’m still stoned from last night, just before I fell asleep I smoked a little sticky icky and I still could have a wake and bake before breakfast. But not today. I have promised to deliver my thoughts by tonight [yesterday]. TISSUE Magazine celebrates 420 daily this April with an editorial pick with and around weed. Since I’ve been celebrating cannabis culture everyday for twelve years now, they asked me to contribute. Honestly I would like to share with you a topic which is keeping my mind busy since months: the quit. 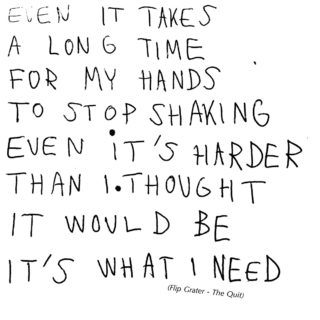 I smoke weed daily. Something between one and five grams. I have to admit that I always smoke weed with tobacco. Nicotine makes it unhealthy and even harder to stop. Sometimes I think I’m the greatest pothead in the world. That no one on this planet is smoking more weed than me. I sold that shit, stole that shit, growed that shit, smoked that shit, drank it, ate it, dabbed it and, whatever you can do with it – probably I did. I’m in love with Mary-Jane.
Everyone who knows me would agree: Yannick is 100% electricity, power, fire, storm … even chillest weed can’t stop my energy, my positive attitude. I’m sure it brightens my inner light. It makes me gently. It helps me to breath in situations were I normally forget to take a breath. 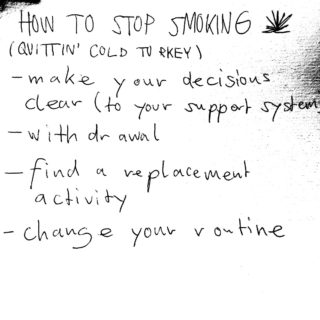 Who is the real me?
Haven’t I been with me in twelve years? Am I paranoid? What does it mean not to smoke weed? The longest break I made was two months in a row. It was not a bad thing. A good friend helped me a lot, we were together almost every day during this time. However, during this break I smoked 20–30 cigarettes and drank alcohol every day. I’m actually the drunk-after-one-beer-type-of-mofo, but still-stuck-after-seven-joints-type-of-dude. I always get my shit done. So what was the reason to stop? Today I only wanted to smoke after dark. Today I smoked the my first joint at half past twelve and the second one at half past two.

But, why?
In 2019 was the first time that I really felt that marijuana is seriously slowing me down. In my head, in my ordinary life, in my ambitions to do big things. I want to play at theatre, I’m currently writing my first play. When rehearsal, it’s not allowed to smoke. Every actor knows. I never cared about an empty wallet. But I get older. I don’t want to go to bed hungry just because I spent everything for the green. I don’t want to just lay there all day and be high af – I often do. And I’ve actually had all the experiences. I’ve been to the Netherlands ten times. I know every Coffee Shop from Doetichem, Arnhem, via Maastricht back to Amsterdam. I got hash from Morocco that tastes like chocolate – 80 cents a gram. I had weed from Spain and California – 30 Euros a gram of which 0,1 gram makes you stoned for two days. I tasted pine, pistachio nuts, forest, earth, chocolate, cookies, caramel, ice cream, strawberries, mangos, mint, spice, haze, juice. It’s getting more heavy. And delicious. There’s always better strain to smoke, more explicit in its effects. There is no good time to stop. But there are reasons and ways to stop, more than ever. 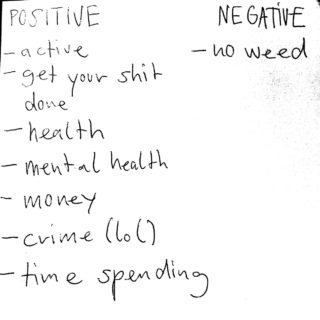 So, how to quit without going nuts?
I don’t know. Let’s roll another one …


All Day Every Day —
Celebrating #420 this April with a daily editorial pick for our readers.
Re-legalisierung — Unterstützt den Deutschen Hanfverband
#42020 #relegalisierung #legalizeit