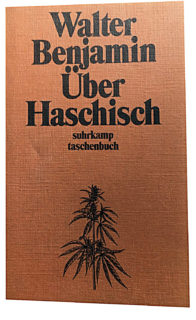 Today’s editorial pick is more of a reading recommendation to serve you (just maybe) the inventors of “cannacritique” and modern day trip anecdotes.

Originating between 1927 and 1930, Über Haschisch [eng. On Hashish] by Walter Benjamin and co-authored by Ernst Bloch is a lesser known collection of writings that was only published posthumous. While still alive Benjamin already called it “bedeutsam” [significant] and yes, the book itself makes a profound appearance in any collectors shelf. Being a notorious leftist but also self-proclaimed bourgeois thinker that collected rare books by Der Blaue Reiter, tried to publish a leftist magazine and was associated with Adorno, Arendt and Brecht among many others: he himself wrote in his Illuminations (in the chapter Unpacking My Library) that the urge to write a book often stems from the conviction, that there are no good books one can afford, and that the most praiseworthy method of acquiring a book is to write it yourself.

“Unlimited goodwill. Suspension of the compulsive anxiety complex. The beautiful ‘character’ unfolds. All of those present become comically iridescent. At the same time one is pervaded by their aura.”

With hashish reports ranging from empathetic confessions, hilarious clichés and honestly concerning horror trip to their critique and reflection in the very sense of a stoner review written with integrity, this book will brighten your horizon in any case. Rumor has it Benjamin first brought up concepts of Aura in this writings and even if not so, it is engaging to read how they were looking at Rohrschach pictures or taking field trips while stoned.

For those who haven’t heard about Walter Benjamin, a jewish, leftist author and critic of the early 20th century, who committed suicide because he was not allowed to pass the border to Spain while he was seeking refuge from Nazi Germany and Ernst Bloch, a marxist philosopher and author who managed to emigrate in the early years of the rise of Nazism, one should always recommend Benjamin’s The Work of Art in the Age of Mechanical Reproduction (1935), Thesis on the Philosophy of History (1940), and probably Bloch’s writings on concrete utopia and non-simultaneity or non-synchronicity in Spirit of Utopia and Heritage of our Times (1940).